Cheltenham, UK – May 2022 – A pressure reducing valve from steam specialist TLV Euro Engineering has been installed at King’s College Hospital in London and operating on a daily basis for nearly 14 years without an overhaul or spares fitted. 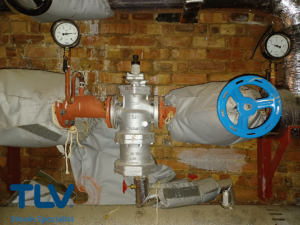 The COSPECT pressure reducing valve was originally specified by TLV Euro Engineering and installed by a contractor in 2008 for the King’s College Hospital NHS Foundation Trust’s Ruskin Wing, the tallest building in the Denmark Hill campus and one housing many of the hospital’s neurological departments. Originally installed outside between two buildings at the site, the COSPECT valve has since been enclosed by further building works at the hospital campus.

Installed to reduce pressure in the main steam line from 8 bar to 2 bar, indirect steam is used for the hospital’s heating batteries and domestic hot water purposes, so the COSPECT valve is operating 24 hours a day, 365 days a year.

It is estimated that the valve has achieved an average throughput of 950kg/h over its 14-year life, equivalent to 117,000 tonnes of steam. And in that time, the pressure reducing valve has never had any spares fitted, never been overhauled and has only occasionally had the operating pressures adjusted by the end user.

Commenting for TLV Euro Engineering, general manager Michael Povey says: “We were approached by Joji Abraham, the hospital’s estate officer, who was so impressed with the durability and longevity of the valve that he had no hesitation in contacting us when seeking a quote for a new plate heat exchanger system for the refurbishment of the Trust’s bone marrow ward.

“The age of the COSPECT was subsequently confirmed by our regional sales engineer during an initial site audit for the planned ward refurbishment project, with the programme since being fully commissioned and featuring two new plate heat exchangers from TLV Euro Engineering.”

When the COSPECT was first introduced in 1985, TLV had been manufacturing steam traps and related steam products for over 30 years and was well aware of the limitations and inadequacies its customers were experiencing with conventional PRV’s. Based on this feedback, TLV applied its fluid control technology to solve the many associated problems including fluctuations in primary and secondary pressures and valve hunting and vibration.

The renowned COSPECT, which many believe to be the ultimate pressure reducing valve (PRV), uniquely combines three components in a single valve – a piston-operated pressure reducing valve, a cyclonical effects separator and a free-float steam trap. This innovation not only saves space but also simplifies system layout, piping and maintenance. The COSPECT also ensures that dry saturated steam is provided at constant pressure and temperature, which helps to improve product quality.

COSPECT’s separator achieves 98% condensate separation efficiency and the strainer removes any remaining rust or scale. In addition, the condensate that is separated out is quickly removed through the built-in free float trap. All of which produces a noticeable improvement in the quality of the steam, and its heat conductivity. This can lead to increased valve life as well as increasing the service life and performance downstream equipment

Maintenance is also simplified thanks to the COSPECT’s modular construction and use of PTFE gaskets, which makes the unit quick and easy to remove, or to maintain inline.

Rhenus expands Down Under

Yokogawa joins global 100 most sustainable Corporations in the World Index