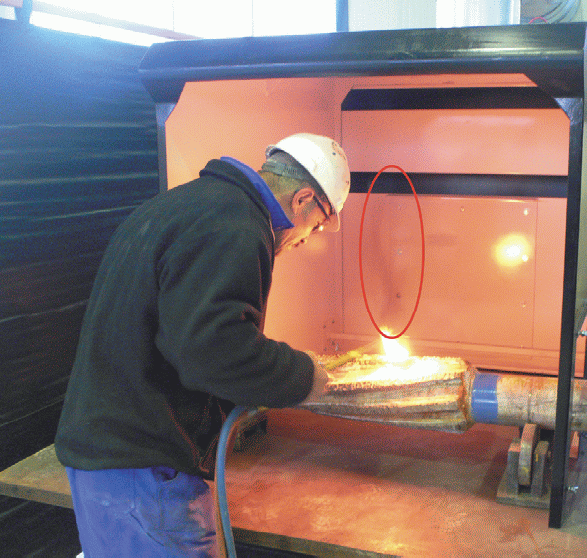 Auto Extract Systems, specialist in solutions to enable pollution free work environments in industry, has helped an international blue chip oil exploration company to remove the health risk from a production process in which high levels of fume and carbide dust are produced in their facility

The oil exploration company’s specific problem was based around the highly hazardous carbide fumes and dust released during the process of remanufacturing of reamers – the large drill bits used for excavating oil from small pockets in the ground.

Prior to contacting AES, the company had extraction systems in place which were not effective in controlling the fumes produced and they recognised a major requirement to ensure the safety and well being of their staff. At this stage, production operatives were rebuilding the reamers to make them suitable for re-use. The problem was that the dust and 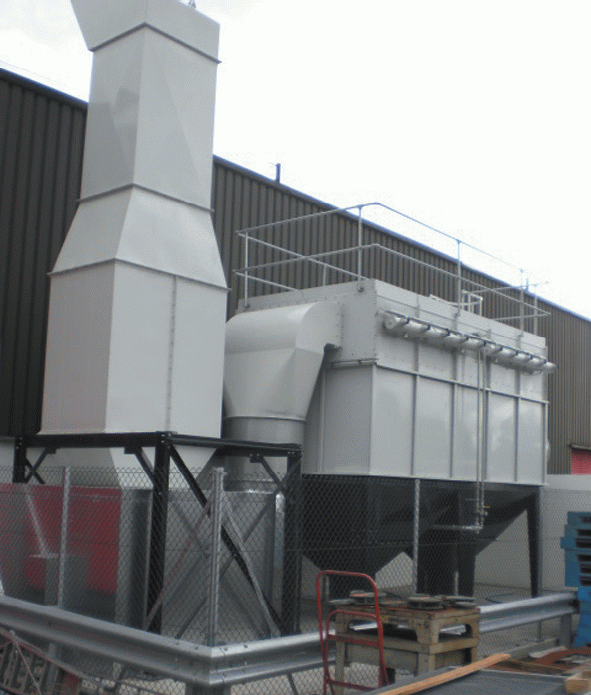 fume from the rebuild was not being effectively controlled by the existing extraction system, and was being allowed to contaminate the whole factory. This not only resulted in contamination of finished products and machinery, but in complaints from operators and also pointed to possibilities of major long term health issues for all personnel involved.

AES provided a detailed system proposal consisting of six benches with a plenum chamber located at the rear of the existing benches. Each plenum was fitted with two rear linear extraction slots to provide an inward air velocity of up to 1.5m/seconds allowing it to comply with HSE guidance. A heavy duty deflection plate was fitted to the front face of the plenum to protect it from distortion due to the excessive heat built up during carbide washing.

The six extraction plenums connected via galvanised steel ducting to a reverse pulse cleaned cartridge filter and fan located externally to the building. The filter unit was fitted with 24 pleated cartridges providing a cloth area of 564m².

The condition of the cartridge filter is monitored by a controller located in the building, the controller monitors the pressure differential between the clean and dirty side of the filter cartridge elements enabling the filter to be cleaned ‘on demand’ by bursts of compressed air discharged by a jet tube into the cartridge when the cartridges are dirty, this enables the system to operate continuously without disrupting operations. 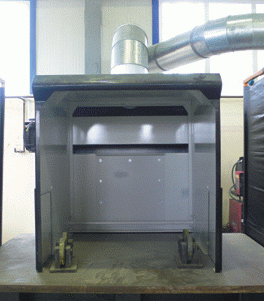 The cartridges are secured via a patented adapter ring system, this saves users the unnecessary cost of replacing items that are still functional. Only the filter cartridge will be disposed of at the end of its functional life. The adapter ring, support cage, pulse jet deflector, and where appropriate, the replaceable gasket can all be reused again. This effectively minimises the amount of waste involved during cartridge renewal. If one of these accessory parts proves to be defective, a whole new assembly is not needed, only a replacement for the particular part concerned.

The discharged waste is collected in two 100 litre capacity bins which are easily removed for emptying. The 30kW direct driven fan set is enclosed in an acoustic enclosure to keep noise levels to the minimum, with attenuation fitted to the discharge ductwork.

In addition to this, each extraction  plenum was fitted with a manometer, this provides the operator with a visual indication of the extracted air volume, enabling the operators to police the functionality of the extraction system thereby acting as an initial safety measure.

AES’ proposal was one of 12 submitted by a variety of national and international organisations. The thorough approach in the system proposal by AES beat competition from 11 other tenders for the work to be carried out in Aberdeen. This later led to an additional installation contract in Azerbaijan and another tender for an installation in Angola.

From beginning to end, the ­installation was carried out over four weeks with AES providing a turnkey installation to include the electrical installation work with constant ­attention to the clients requirements allowing minimum affect on production, while always maintaining a close attention to health and safety measures.

Export specialists advise there has never been a cheaper time to export, as Brexit dents EU relationships