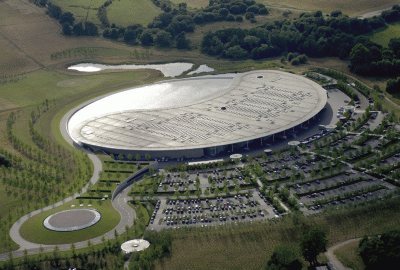 In December 2010, the McLaren Group became the first organisation operating within Formula 1 to earn The Carbon Trust Standard – certifying the Group’s commitment to measuring, managing and improving its carbon efficiency. It followed a rigorous assessment of the carbon performance of McLaren’s 11 UK sites over a three-year period. During the assessment, the McLaren Group improved its carbon performance by nearly 1,400 tonnes of CO2 emissions – equivalent to seven month’s running of the McLaren Technology Centre’s wind tunnel

You’ll never create greener technology by hitting a golf ball or kicking a football but you just might do so through the constant innovation of Formula One.

People will always want cars – and a huge number of industries, companies and livelihoods are dependent on that fact. Instead of just wringing our hands and saying “oh well, that’s just the way it is”, McLaren is endeavouring to make F1 sustainable, and in doing so, send a message to the automotive industry.

Competition is the mother of invention

Our business relies on the world’s best engineers, with the skills to constantly innovate technologies that will help us win races. Another by-product of that is a steady overflow of innovation making lighter, more aero dynamic, and fuel efficient vehicles. That intellectual property then filters down to the automotive sector. Turbocharging, fuel injection, variable valve timing and kinetic energy recovery systems have all been developed within F1. McLaren simply cannot afford not to be in F1. If we dropped out, we’d miss out on the uncompromisingly high levels of innovation that the F1 competition provides.

There is a natural symmetry between F1’s continuous drive for superior performance and our need to cut our impacts on climate change: F1 is about speed, carrying less fuel means cars can go faster. Our MP4-12C is the most efficient car in the high performance sports car market, with the lowest carbon emissions of any car in its class. In fact, per horsepower, it emits lower CO2 than even today’s hybrid cars. 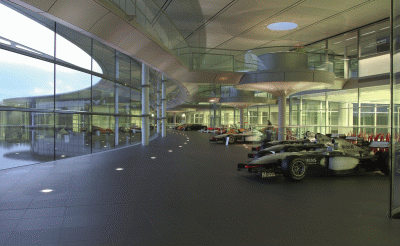 In terms of the sport itself, many people are surprised how much attention is focused on reducing carbon emissions. Our current goal is for standard F1 2.4 litre engines to be replaced by 1.6 litre direct injection turbo engines by 2013. With a considerable reduction in rpm from today’s 18,000rpm models, this engine will cut fuel consumption by half.

Recently, we commissioned a study showing the ‘true costs of F1’ – a full scale emissions analysis of F1. As a result we now have a baseline of the sport’s carbon footprint which we’re working to reduce across our entire supply chain. The good news is that by 2012 the total carbon footprint of F1 is expected to be cut by 12.4 per cent, compared to 2009.

But driving automotive innovation and making F1 more sustainable are just part of the picture. Another substantial source of the organisation’s emissions is its 11 UK sites, and 1,585 staff. These emissions were measured, managed and reduced in order to obtain the Carbon Trust Standard – the de facto mark of an organisation taking real action on climate change. As well as making the type of improvements every large business should, such as installing electronic building management systems, there were some very F1-specific demands.

Wind tunnels are vital to the science of F1. A top F1 team can spend around $50M on a wind tunnel – a massive tube joined at each end and with fans capable of producing airflow approaching 200mph. When a car is inside, we can recreate a given speed so that the engineers can monitor the vehicle’s reactions, and develop parts that increase grip and reduce drag. Every F1 team has now signed up to wind tunnel resource restrictions in terms of wind speed and hours run – so cutting our use had the dual benefit of meeting Carbon Trust Standard assessment criteria, as well as wider industry goals.

If you’re one of the millions of organisations that use compressed air, you’ll know that air is not free, it’s expensive and in many cases wasteful, both from a financial and emissions perspective. Our solution was simple but effective. We combined our two compressed air systems (one for the wind tunnel, the other for factory use) into one, saving 150 tonnes of CO2/year.

Even our truck drivers are now incentivised to drive more energy-efficiently. Aided by state-of-the-art data capture tools which track performance, a healthy culture of competition for driving efficiently has developed amongst our truck drivers. All in all, our achievement of the Carbon Trust Standard resulted in an increase in carbon efficiency of nearly nine per cent relative to our turnover, and also saves us nearly 1,400 tonnes of CO2 a year.

Where solutions did not exist our people created them – the bespoke low-energy lamp system on our VIP roadway was dreamed up and installed by one of our engineers. As a company employing over 100 highly qualified engineers, we’re not short of ideas. But undergoing the Carbon Trust Standard assessment gave us the independent, expert verification that our emissions strategy was on the right path and would stand up as evidence of real action.

In the past, a number of unhelpful green claims, based on little substance, have been made from within F1. But now that carbon literacy is on the rise, consumers expect claims to be backed up with evidence. Similarly, partners, and sponsors are constantly evaluating us on environmental performance. Being awarded the Carbon Trust Standard offers concrete proof of the real progress we have made in cutting our carbon footprint.

McLaren’s followers certainly appreciated our leadership on the UK’s emissions reduction. The Carbon Trust Standard announcement was one of the most widely ‘tweeted’ stories of last year when it hit Twitter. I guess for many people outside of the sport there was an element of surprise that a sports car manufacturer was tackling its emissions. But the vast majority of people that read, and passed around the story, I think, were followers of the sport that were proud that McLaren was doing its bit to reduce the UK’s emissions.

If you put all of these pieces together, the innovation, the evidence of action and the international influence of our brand, it’s companies like McLaren which have the potential to turn a negative into a positive. Ours is probably the world’s only sport with the resources, know-how and funding to drive forward low emissions technologies with the potential for mass-market crossover. Ironically, an industry traditionally tarred as a carbon emitter has the power to drive lower emissions technology innovations.

But actions speak louder than words. Whether using McLaren IP to develop low emission cars, or reducing our own direct emissions through the Carbon Trust Standard, McLaren is focused on switching to a lower carbon model.