“This year’s Hannover Messe offers excitement like never before,” said Deutsche Messe managing board member, Dr. Jochen Köckler. “The exhibition halls are fully booked, so we will have ample opportunity to experience first-hand what happens when mechanical engineering converges with electrical engineering and IT, when industrial robots meet AI, and when big data sparks totally new business models. But, despite all its digitalisation content, Hannover Messe is, first and foremost, a show about human-centric technology. With innovations like cobots, VR glasses and exoskeletons on display, the show will feature an unprecedented wealth of assistance systems designed to help people as they go about their everyday work.” 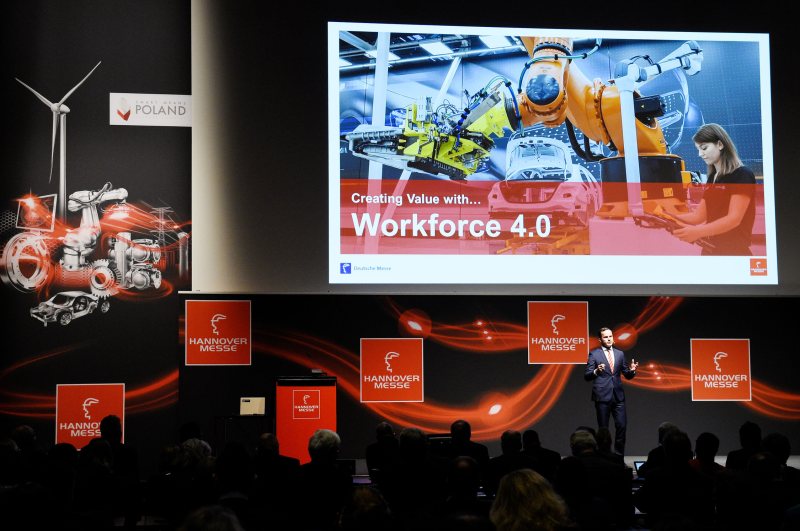 From 24th to 28th April, more than 6,500 exhibitors from 70 nations will present technologies for tomorrow’s factories and energy systems in an action-packed industrial technology showcase themed “Integrated Industry – Creating Value”. 60 per cent of these exhibitors will come from abroad. The top exhibiting nations (after Germany as the host country) are China, Italy, Turkey, India and the USA. This year’s Partner Country, Poland, will be fielding a line-up of about 150 companies.

Turning conventional factories into smart factories calls for a mix of innovative automation technology, cobots and AI. Collaborative robots (cobots) of the latest generation are very easy to program. What’s more, some models can perform tasks and solve problems autonomously and pass on what they’ve learned to their robot co-workers. Köckler: “These robots can learn from one another, but it’s still humans telling them what to do. In other words, they are universally deployable intelligent tools designed for use by factory workers.”

This year’s Hannover Messe will feature robot systems that are capable of interpreting human behaviour. Applied to industrial production contexts, this means that robots will learn to work at the same rate and speak the same language as humans – rather than the other way around – and thus be better able to support them in their work.

Digitalised production processes generate vast quantities of data that hold clues to many things, including, for example, the causes of malfunctions and stoppages. In the not-too-distant future, manufacturing systems will incorporate machine-learning technologies that analyse this data centrally and feed the results back to the production machines in question, thereby enabling them to learn and self-optimise. As such, machine learning is fundamental to predictive maintenance – a highly promising aspect of Industry 4.0 that will feature prominently at the upcoming Hannover Messe.

Some factories already leverage the power of supercomputers for fault diagnostics. Service personnel contact the computer via smartphone and describe the problem. Using photographs, the computer system detects the type of machine in question, analyses the fault and suggests a fix. This application scenario has been used to develop an app that will be presented at Hannover Messe and which is available free of charge.

Technologies for the energy transition

Under the “Integrated Energy” banner at the upcoming Hannover Messe, the world’s leading technology companies and research institutions will highlight the changes the energy industry will undergo as well as the individual technologies that will play a critical role in this transformation. “The Kopernikus projects initiated by the Ministry of Education and Research are Germany’s biggest-ever research initiative on the energy transition. The initial findings of these projects will be presented at this year’s Hannover Messe. The primary focus of the projects is on expanding and restructuring our country’s energy grids and on developing solutions for storing surplus energy from renewables by converting it into other energy carriers,” said Köckler.

Poland: a strong partner in Europe

Köckler added: “In light of the current geopolitical situation, Poland’s participation as Partner Country conveys an important message about the strength of the European Community. Hannover Messe turns 70 this year. Now, more than at any other time in its history, it is a platform for free and fair trade – both in Europe and around the world.”

Seminar shows how to get ahead through a switch to robots