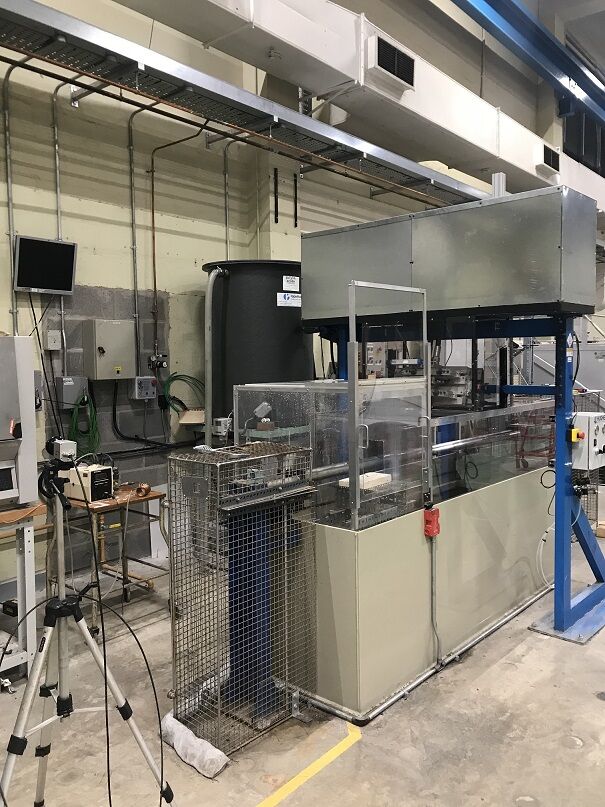 High Pressure Water (HPW) descaling is the process of removing oxide scale by spraying the hot steel surface under a range of moderate-to-high pressure water using stationary (usually flat jet nozzles) or rotary (rotor descaler) systems. The aim is to ideally remove loose to sticky, primary to tertiary scale under optimum impingement and surface chilling, as well as power-water flow rate consumption, for improving the surface quality of rolled products and minimising work roll wear. Complex solid-fluid thermal-mechanical mechanisms are acting through the scale, scale interface and sub-surface of the steel substrate depending on the descaling process parameters of impact pressure, descaling energy and temperature.

The HPW descaling process is a harsh process where, in particular, measurement of temperature and surface state are difficult to achieve (in view of steam/water, oxide scale debris, confined descaling boxes). Measuring surface losses using IR technology can provide benefits to thermo-mechanical processing for difficult to roll steel grades that are prone, for example, to ductility cracking and/or surface defects, and leads to efficient descaling under robust and energy efficient regime maps.

To study and optimise the descaling process, Tata Steel together with the Steel Metal Institute in South Wales (SAMI) https://www.samiswansea.co.uk/ have revamped a HPW descaling rig to optimise the process. The unit can be used in two modes, static or dynamic, with hot or cold material, from steel to simulation material. Reheated samples are typically blocks of 70x70x100 mm thick placed on a carriage which transports the sample at a fixed speed (up to 4m/s). Following descaling, the carriage stops and the sample is transferred to an Argon-filled container to limit further oxidation.

All signals (height, pressure, flow, temperature, etc) are logged via a Windaq data acquisition system. A sophisticated post-analysis procedure has been put in place to characterise descaling efficiency.

Tata Steel is using a thermoIMAGER TIM M-1 thermal imaging camera from Micro-Epsilon with a short 1µm wavelength, as well as the thermoIMAGER TIM 400 T1500 long wavelength thermal imaging camera, to measure surface temperature before and after descaling. The cameras are mounted above the descaling trolley. By utilising both short and long wavelength detectors and the effect of emissivity on the scale at different wavelengths, Tata Steel can assess descalability and heat loss based on nozzle pressure/flow and descaling speed to develop regime maps for the production process.

The thermoIMAGER TIM M-1 camera was supplied with two exchangeable optics, f=25 and 75mm respectively, which allows flexibility in the field of view and camera location. The 1 µm short wavelength detector is most suited to harsh, steamy environments with reduced emissivity error at high temperatures. Included with the cameras is the powerful TIM Connect software, which allows the cameras to be used in a linescan mode or continuous acquisition from a fixed distance and location. The linescan function is particularly helpful when there is restricted viewing space and allows a complete image to be created of the slab as it passes.

As Didier Farrugia, Scientific Fellow, Rolling Finishing & Measurement Department at Tata Steel RD UK commented: “The thermal measurements made, together with surface state during and post-descaling, coupled with the use of a CCD optical camera post-descaling, has enabled the development of key HPW descaling knowledge for direct implementation and optimisation of plant practices.”

Any optimisation of yield, whether in terms of scale or metal loss during reheating, as well as enhancing surface state and defect minimisation, represents a critical cost-performance benefit for the steel industry, in the region of £1million for ~1% yield gain.

Didier Farrugia concludes: “The cameras have proven to be reliable and easy to use, including the possibility to synchronise the two cameras at two specific locations for full temperature traceability. The cameras are also being used in other specific parts of the steel manufacturing process.”

Flat start to 2016 for UK manufacturers