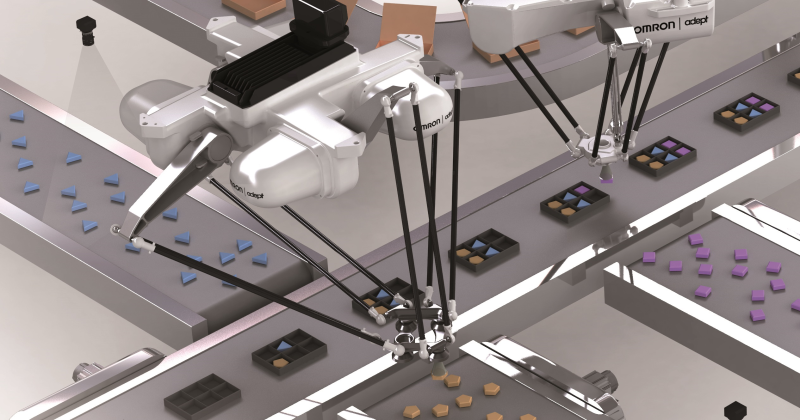 On Stand B34 at the PPMA Show 2017, Omron will debut what is said to be the world’s fastest and most flexible Delta pick and place robot. The only Delta on the market with four arms, the Omron Quattro also offers a larger working envelope and a degree of manipulation not achievable elsewhere. Furthermore, the Quattro is also the only Delta robot that is USDA certified and constructed with materials that are safe for primary food handling, making it more hygienically-advanced than existing robots on the market.

The key to the advanced performance of the Quattro Delta robot is a patented four-arm rotational platform, which offers significant advantages over traditional three arm Delta robots. The fourth arm allows the robot to reach up to 30 per cent further than traditional designs, facilitating a larger operational area, including the ability to access wider conveyors. The extra arm also allows the robot to tilt, meaning the load can be placed at a different angle than it is picked – a real game changer for packaging and other automation applications. The powerful combination of speed, manipulation, reach and a 15kg payload will ensure the Omron Quattro Delta is ideal for any general automation application.

Dan Rossek, Omron marketing manager, said: “PPMA members go out of their way to exhibit the latest cutting-edge technology to attract UK brand owners from the food, pharma and FMCG industries. This year, Omron will debut the only four-arm Delta robot in the world – the Quattro, which is also the fastest Delta robot on the market and the only system that’s USDA hygiene-certified. It’s a feat of engineering for all to see.”

Complementing the Quattro Delta on Stand B34 will be a preview of Omron’s futuristic OKAO software. The demonstration will show powerful gesture control over the production process, as well as how facial recognition can be used to unlock different levels of access to control functions and information. Omron will also demonstrate a new 4.0 ready visualisation platform, giving a complete visual representation of critical machine and production data.

TRUMPF opens the doors to its powerhouse in March