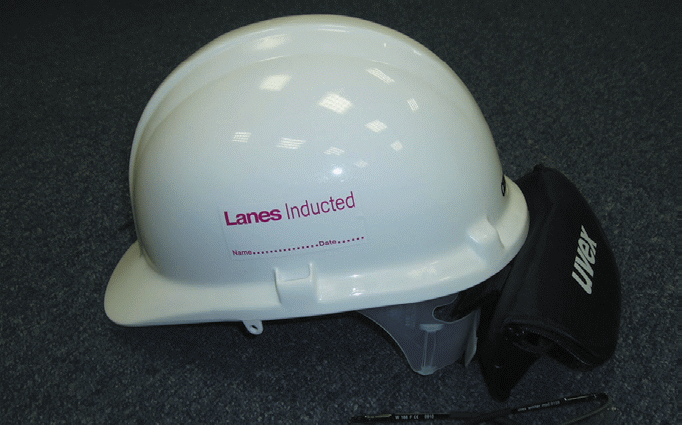 Drainage specialist Lanes Group has solved wastage and damage ­problems with regards to safety glasses by switching to uvex ­spectacles and safety pouches. The pouches are worn on the back of helmets acting as a storage compartment for the protective eyewear.

Health & safety manager of the Rail Division, Scott Tracey, is responsibile for the health and safety of around 150 workers on the LU and TL contracts. He supervises and liaises with both Lanes’ own staff and sub-contractors, training workers in working safely, as well as writing company procedures, undertaking risk assessments and procuring and testing equipment and personal protective equipment (PPE).

Up until two years ago, Lanes had been experiencing a high level of wastage of the safety glasses it had been using, because the spectacles continually misted up and easily became scratched, since they did not have anti-mist or anti-scratch coatings. The wearers also had nowhere to put the glasses when they took them off.

Tracey says: “The men used to wear the glasses, then put them in their vans. They were not practical nor user-friendly. We were getting through at two to three pairs a week per worker.”

Tracey obtained approval for a free two-month trial of new safety specs by uvex. “After feedback from the users, we chose the uvex Winner and the uvex X-trend safety spectacles,” he says. The Winner is said to be a comfortable, flexible, frameless metal spectacle with large lenses that gives clear visibility in all directions, while the X-trend has a large wrap-around lens, giving unobstructed vision in all directions. Both protect the whole eye area.  Workers use the spectacles every night for every type of maintenance activity. Lanes also purchased uvex’s protective pouches for storing the glasses, which its workers adapted to wear on the back of helmets by attaching them to the band around the back of the helmet using the Velcro clips.

Workers are said to be delighted with the X-trend and Winner spectacles, which they can choose between according to their preference.

“The feedback we have been given is that because of the anti-mist coating on the lenses, the specs don’t mist up, clouding their vision. The scratch-resistant coating ensures they don’t get damaged and this is further helped by the protective pouch being to hand all the time on their helmets. It encourages the guys to wear the glasses, so has enhanced safety on all the sites.”

Now that Lane’s maintenance workers wear the protective pouches for the uvex glasses on the backs of their helmets, they avoid getting scratched or damaged in transit on their vehicles’ dashboards or thrown into their tool bags after they have worn them, where they quickly used to become ineffectual.

In addition, the number of men wearing the glasses has increased. “Although it is not mandatory for workers to wear safety glasses, we are finding nearly all our operatives are choosing to wear them, for all activities. The protective pouches have also improved not only safety, but also the audit/site inspection regimes by our clients that are undertaken regularly,” says Tracey.

Working on the London Underground is dirty work and wearing the specs on helmets rather than belts keeps them cleaner. The user always knows where the glasses are, avoiding the issue of them slipping around the body when worn on the belt. “Not everyone on site wears a belt, but everyone wears a safety helmet,” Tracey points out.

According to the Health & Safety Executive (HSE), there are over 2,500 reportable eye injuries at work each year in the UK, a figure considered to be lower than the actual number, due to under-reporting. Since introducing uvex glasses, the company has not had any reported eye related injuries.

Although initially more expensive than the glasses previously used because they are of superior ­quality, they have enabled huge cost savings, since each pair lasts around two months, rather than having to be thrown away after a few days’ use.

Understanding ‘desire lines’ – and what they mean for health & safety