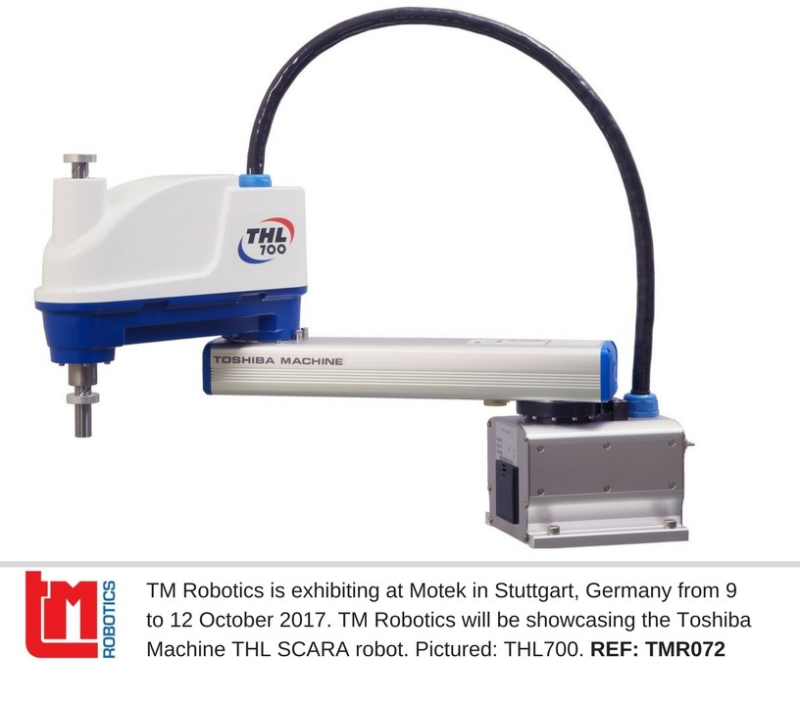 Industrial robot specialist, TM Robotics is exhibiting at Motek in Stuttgart, Germany, 9-12 October, 2017. The international trade fair is one of the world’s leading events in the realm of production and assembly automation. TM Robotics will be exhibiting alongside Swiss automation expert, Elmotec, Hall 7, Booth 7202.

At the event, TM Robotics will be showcasing the Toshiba Machine THL SCARA robot, part of the company’s latest line of cost effective and lightweight SCARA robots. The complete THL robot series consists of eight SCARA robot models. The smallest in the range is the THL300 and the largest is the THL1200 with corresponding arm lengths of 300mm to 1200mm respectively.

TM Robotics offers a comprehensive range of Toshiba Machine 6-axis, SCARA and Cartesian robots. At Motek, the company will demonstrate a THL SCARA robot working in collaboration with the TAD bowl feeder. In addition to the TM Robotics stand, the company will also be supporting American automation company, ASG Screw. ASG Screw will be exhibiting in Hall 5, Stand 5422. ASG will be demonstrating its ASG screw feeder.

Motek is one of the only trade fairs to focus on such a broad range of processes in the mechanical engineering and automation sector. The nature of the show provides exhibitors with a consistent target group of manufacturers from the automotive, machinery, electrical, electronics, medical engineering and solar production industries, as well as metal and plastic processing companies.

“The THL SCARA robot series is our low energy robot range,” said Nigel Smith, founder and CEO of TM Robotics. “The series was developed to provide low energy consumption at a light weight. It is also ideal for price-conscious manufacturers, end-users and systems integrators that are looking to incorporate automation into their processes without breaking the bank.

“The range provides a model for any size of application, with eight different sizes, each with varying arm lengths and handling payload. Regardless of the size of the model, the environmentally friendly THL range offers a reduced weight and energy savings of up to 50 per cent more than other robots in the SCARA series.”

Visitors should register their attendance and book a ticket for Motek in advance. Tickets can be acquired on the Motek website, which also provides directions to the venue and a full exhibitor list.