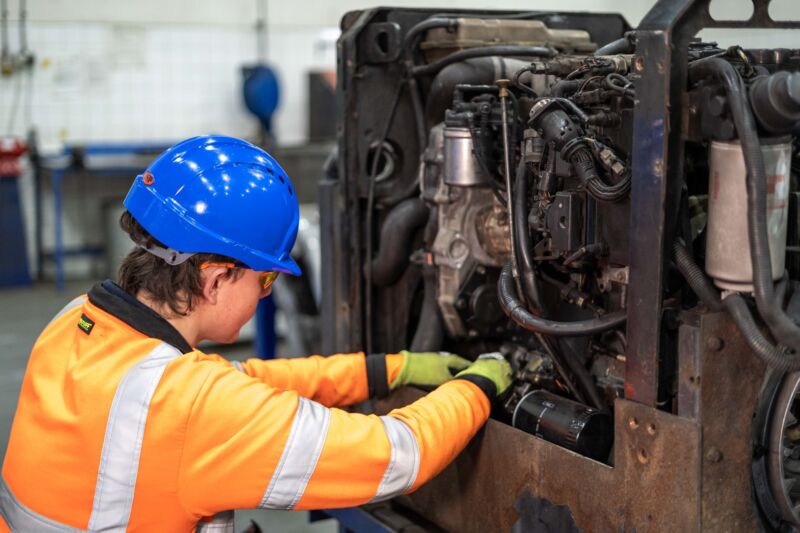 The heptathlete Jessica Ennis-Hill had one full time coach, Antonio Minichiello, for combined events throughout her career. However, when looking to improve her javelin, she received specialist coaching from World Championship bronze medallist Mick Hill. Like heptathletes, generator servicing companies are expected to perform a wide range of activities, yet there are still some tasks that require a specialist’s help. Here, Pete Trueman, Service Delivery Manager at DiPerk Power Solutions, exclusive supplier of Perkins engines and parts in the UK and Ireland, shares a case study of how companies can gain this specialist expertise.

In the UK, there is concern from Government, firms and academic bodies about a shortage in engineering skills and what this means for future generations. There is also some debate in the industry about what specific skills are required as technology continues to evolve.

“Skills have been top of the priority list for a number of years, and as we move into the world of Industry 4.0, those skills challenges are changing. The need for data and digital skills is increasing and we’re seeing a huge upskilling challenge,” explained Ann Watson, CEO at engineering skills body Enginuity.

“…it’s also becoming increasingly difficult for employers to second-guess what skills they’re likely to need in the future,” added Watson. “What they’re telling us is that in five years’ time we don’t know what an engineer’s going to look like but what we need is someone that’s got a broad range of skills that can be applied to different situations and technologies.”

A heptathlon of servicing events

Many generator servicing companies operate across the full spectrum of engine manufacturers and carry out routine maintenance like oil, coolant and filter changes. The variety of tasks they must perform demonstrates how important it is to have a broad range of skills, as Watson said. However, this approach can come unstuck when customers enquire about non-routine works. For example, reprofiling the exhaust system and synchronising standalone units are time-consuming and complex tasks that require skills beyond an engineer’s basic toolkit.

When carrying out major repairs on engines, unfamiliarity with a particular issue may cause delays and extend servicing timescales. This can be challenging when a business is paid based on generator uptime and its ability to supply required loads. However, lacking in-house specialised maintenance skills is no reason to turn customers away.

One solution is forming a mutualistic relationship with the engine manufacturer. This involves producing a clear contract that clarifies when the original equipment manufacturer (OEM) will step in, and to what extent it can contact the customer. Once the company’s in-house engineers establish that they require external assistance, they can outsource it to the OEM — who has both knowledge and experience of the particular model.

A case in point

In August 2020, DiPerk began working with a generator installation and maintenance company based in Leeds. The company owns various store and firm frequency response (FFR) sites, which provide short term operating reserve (STOR) for the local grid. The company also builds and maintains these sites for energy companies and private investors. It has a large in-house team of engineers that carry out maintenance, such as fitting emissions reduction equipment to ensure that the generator engines comply with the medium combustion plant directive (MCPD).

The company has fleets of diesel and gas-powered generator sets that deliver supplementary power when the grid is taking an additional load. It has a number of sites across the UK and every site has multiple generator sets. Every generator on each of these sites is containerised to protect them from weather and other external damage.

The company’s engineers noticed that oil leaks were starting to appear from the main engine sump on some of the generators. The sump covers the bottom of the engine block and holds oil that is not circulating around the engine. There were also leaks coming from the rear flywheel housing, which is bolted onto the engine early during production and so is difficult to access once the engine is put into the containerised genset.

The FFR sites use generators produced by various OEMs. This means that the company would need to invest in various software licenses, training, cabling kits and other equipment to confidently service every type of machine. Together, these costs could add up to tens of thousands of pounds. Recruiting engineers that specialise in a particular model of engine would have been another false economy because of the wide range of engines that the service team are required to work with.

Many of the company’s generators are stored on remote sites that are not regularly monitored — if the leaks were left unattended, they could cause ground contamination at the facility. The engines would shut themselves down due to low oil pressure and the customer could lose money because the machines are unable to provide supplementary loads. Tariffs are also stringent and the client or energy company could be penalised if the FFR sites were unable to deliver the necessary power.

The company first approached Perkins, the engine manufacturer, who sent an engineer to the site. Perkins liaised with the generator OEM and both concluded that the repairs would be difficult while the genset was containerised. Eventually, the OEM contacted DiPerk because of its knowledge of Perkins engines and experience in generator maintenance. DiPerk began working on the repairs in late August 2020 and the project is still ongoing.

A particular set of skills

Space was the main barrier — there were only a couple of inches under each engine, where the sump is located. To overcome this limitation, DiPerk unmounted the engines and used a pair of air jacks to lift them up. After securing the engines on taller mounts, its engineers could change the sub gaskets while the machine was still inside the container. It has since repaired six engines on one site and three from another.

Both the OEM and the generator installation and maintenance company wanted to avoid removing the gensets from their containers, because this would require hiring expensive cranes, transporters and low loaders. Transportation would also be difficult — roads would need to be closed if the generators had to be removed and delivered to a specialist facility. By using air jacks, DiPerk could fix the leaks inside the container, causing minimal disruption.

Because DiPerk is carrying out the sump repairs, the generator company can instead focus on routine maintenance, including daily checks, oil and filter changes. Therefore, it has more time and its in-house engineers can play to their strengths, while continuing to deliver the best possible service for customers.

Because generator servicing companies work with various OEM machines, every project is different. DiPerk is a Perkins specialist and will partner with the company to diagnose and fix complex issues that engineers may not have encountered before. This means it can supplement the skills of in-house teams, who can benefit from having this specialist knowledge onboard.

Like a heptathlete, many engineers have a broad skill set. When the need arises, be it for a javelin coach or a Perkins engine repair, sometimes, nothing can beat a specialist’s eye.

Software monitors assets around the clock