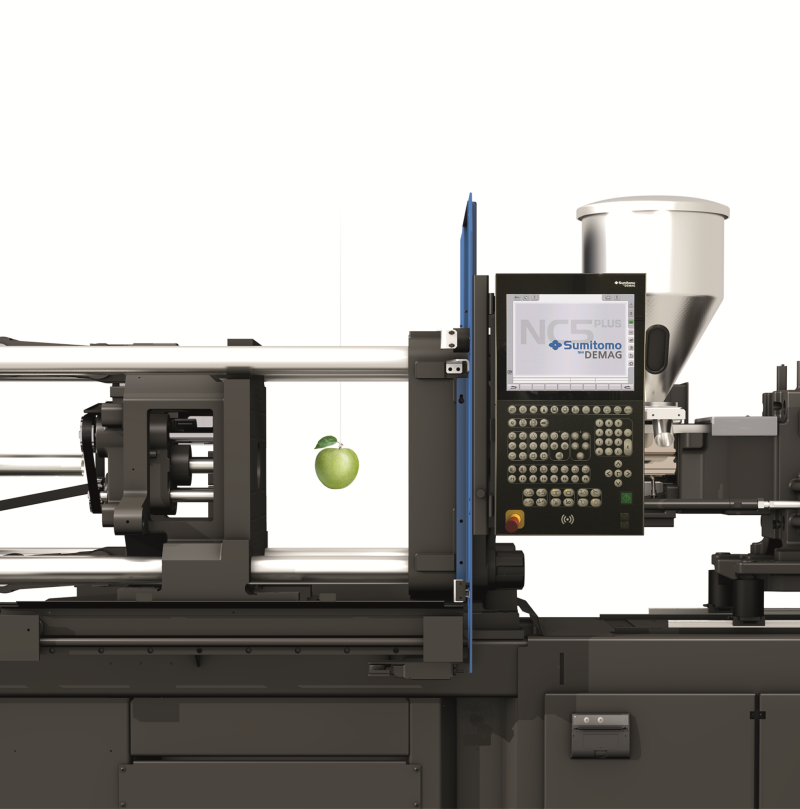 Cared for and maintained properly, the average injection precision mould running 10-second cycles should have a lifespan of over 10 million cycles over five years. However, there are a number of different elements, including melt pressure, clamp design, and the corrosiveness of the material being injected that can weaken the mould structure and impact the quality of parts being produced.

In a demo at the machine’s recent UK launch event, SDUK’s process and training engineer James Hines showcased how the new FEM-assisted centre press platens deliver improved clamp force distribution, which combined with Sumitomo’s own highly dynamic servo drives, delivers maximum in-mould protection should a foreign object enter the mould. Dropping an apple into the closing mould, James showed how the combination of technology improvements, which include up to 30 per cent stiffness improvement in the moving and stationery platens with enhanced linear guidance, improves production safety.

“There are so many variables that affect the life expectancy of moulds,” he emphasised. “Rather than simply slamming the mould open and closed, the sequence should be smooth and controlled, which is exactly what our drives are designed to do without incurring cycle time penalties.” Many of the IntElect’s enhancements can be attributed to the machine’s improved drive system, which is geared towards high dynamics, precision and repeatability. The new 400v motor design is shorter and features new types of spindles. Its encapsulated windings improve heat transmission. While the new load cell improves precision in addition to reducing heat sensitivity.

“What we have developed is a new drive that perfects the interaction between the injection unit, clamping unit and ejectors, which can help to protect against mould wear,” explained Nigel. The enhanced safety, when integrated with other features, including the highly optimised axis control, which is applied to all machine axis, and single valve technology to reduce lubricant consumption by 50% per cent, can significantly reduce the frequency for scheduled machine and mould maintenance. Potentially doubling the machine service intervals and saving on average €780.00 per annum on lubricants. For greater moulding dynamics and component quality, activeFlowBalance and activeLock technology can be incorporated. While the IntElect’s new NC5 Plus control panel, featuring a capacitive glass colour touchscreen, offers high screen clarity, allowing users to interact naturally and safely with the machine.

Commenting on the IntElect2’s clean design, which comprises more closed cabinet space for peripheral equipment, Dave Austin, senior processing engineer from Hi-Tech Mouldings Ltd, said: “I was struck by how the overall machine design has been simplified, making it easier to keep clean and maintain. It also provides users better access to the nozzle guard and clamp, which would also make maintenance less cumbersome and time consuming.”