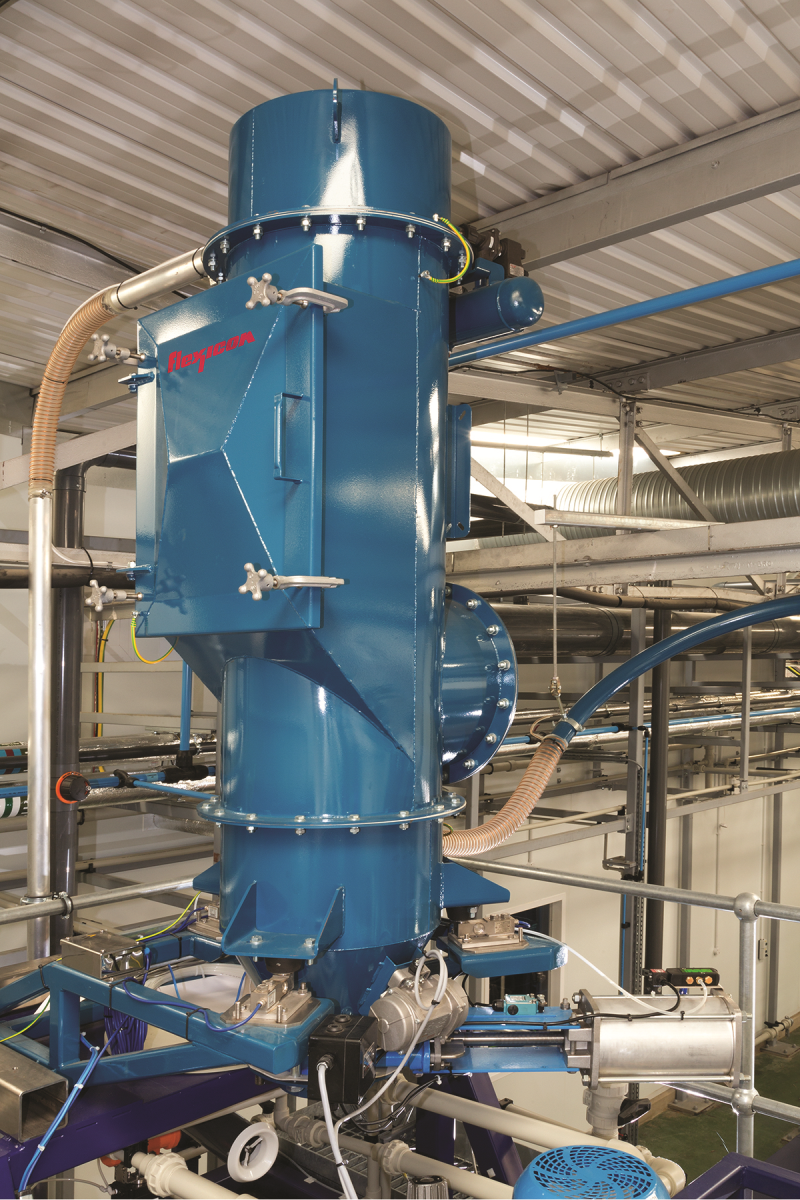 The future of lithium-ion (Li-ion) batteries found in laptops, phones, hybrid cars and other applications may be taking shape at a UK startup. Nexeon Ltd. has built a plant at its headquarters in Abingdon, Oxfordshire, to produce a silicon anode it developed that significantly improves the energy density and operating life of Li-ion batteries.

A critical part of producing the silicon anodes involves transferring precise amounts of silicon powder and other ingredients from a bag dump station to a slurry tank for mixing in an aqueous solution, using a dilute-phase, Pneumati-Con® vacuum conveying system from Flexicon (Europe) Ltd.

The transfer is dust-free and safe. “Silicon powder is combustible and can be explosive under the right conditions,” says David Bent, production director at Nexeon. “Flexicon analysed the powder and developed the pneumatic system for it, including dust control and explosion protection measures.”

The first step in transporting the powder is manually emptying bags of silicon powder and additives into the bag dump station mounted on a floor hopper. A bag tray support provides a work surface for the operator to stage, clean and open bags.

A dust collection system integral to the bag dump station draws airborne dust through two cartridge filters, as reverse pulse jets automatically clean the filters to and return accumulated dust to the hopper.

The powders flow from the bottom outlet of the floor hopper through a pickup adapter into the two-stage pneumatic conveying line. The first vertical section rises 90 degrees from the hopper outlet and connects to the second horizontal section, which runs from the silicon unloading area to the main processing area. The receiving hopper empties into a slurry make-up vessel.

A side channel blower downstream of the filter-receiver atop the receiving hopper provides a vacuum that pulls the material through the pneumatic line, improving dust control. The fully enclosed system transfers the silicon powder virtually dust-free.  Since the system operates under vacuum, even if the integrity of the enclosed system is unintentionally compromised, the silicon powder will remain within the conveying system.

The filter receiver separates the silicon powder from the air stream before the powder enters the receiving hopper. Like the bag dump station, it has a reverse pulse jet system that automatically cleans the filter cartridges at timed intervals. The filter-receiver is isolated in a safe area and protected with an explosion relief panel designed to exhaust the energy associated with an explosion without causing a catastrophic failure of the filter receiver. At the bottom outlet of the receiving hopper, a pneumatically actuated slide gate valve discharges the silicon powder into the slurry tank.

Nexeon avoided a piecemeal approach to equipment selection and installation by relying on a complete system from Flexicon. “We are very happy with the design, construction, installation and commissioning service provided by Flexicon,” explained Mr. Bent.

The market for improved lithium ion anodes is enormous globally as they are found in consumer electronic devices such as smart phones, tablets and laptops. The largest emerging market is electric vehicles where demand is expected to triple, says David Bent, Production Director.