Conveyor has parcel sorting wrapped up 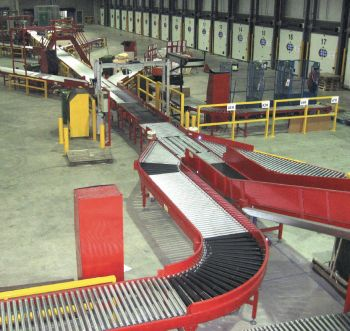 TNT Express provides businesses and consumers in over 200 countries with an extensive range of services for their mail and express delivery needs. With ever increasing demands for shorter delivery times, optimal reliability and added value services, TNT is constantly working to meet these demands within distribution and sorting hubs by automating sorting processes and the tracking and tracing of parcels and documents.

After reviewing the first project completed by Astec Conveyors at TNT’s Birmingham depot, the UK Network Development Team acknowledged that the installation of a reversible straight-line conveyor system had been extremely successful and would form the basis of MHS installations at all future new TNT sites.

Following the same basic working principles as the original system installed at the Birmingham depot, Astec Conveyors in conjunction with TNT designed a universal and versatile concept to provide an effective reversible materials handling system that could be operated throughout the TNT depot network.

A number of key sites required increased flexibility which necessitated a ‘multi-mode’ option where the system could not only provide an end to end reversible system, but also the option of both upper and ground level material handling systems to operate independently and in opposite directions. As a result, a number of projects involved the installation of mezzanine floors.

The new system allows for inbound trailers to be efficiently unloaded at the same time, speeding up the flow of freight into the depot.

Astec’s specially designed, reversible modular merge/divert and centralising units are fitted with close pitched segmented rollers to minimise the possibilities of ‘dead areas’ and provide optimum merge/diverting capability for large parcels down to small Jiffy bag items. TNT has acknowledged that the development of these key elements has contributed to the system’s success.

Outbound goods are transported and indexed on conveyors to a checkpoint, to be checked, weighed and then labelled with a detailed printed delivery/routing label. Following this procedure, parcels are then merged and transported on a close pitched powered roller main line, via an inline barcode reader station which was designed and installed to function in both directions.

The barcode scanner checks and communicates information to the host TNT ‘Universe’ computer system and the sortation PLC system to ensure traceability, whilst performing the updates in real time.

Items are discharged either down designated inclined/declined belt conveyors where mezzanine floors have been installed or directly onto the telescopic boom conveyors into awaiting trailers to be delivered to the hub for further sorting.

The Astec sortation system is designed to run in opposite directions. Returning inbound parcels from TNT sortation hubs are unloaded from trailers, via telescopic conveyors. Barcode routing labels are scanned, sorted and conveyed to be diverted down designated lanes for regional deliveries.

Astec Conveyors’ sales director, Roger Pendleton says: “Our previous experience of system requirements and working closely with TNT was an obvious advantage, especially as there is a very tight window for installation and it is essential there is no disruption to ongoing operations. There is a lot of planning required to ensure that we maintain operations, especially as Astec needed to break-in and install the new system over a weekend period.

“As a manufacturer of handling equipment and automated systems, this enabled us to provide a ‘one-stop source’ for TNT, enabling us to focus the projects and complete on time and within budget.”