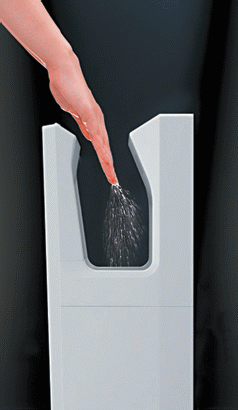 The revolution in hand drying has cranked up a gear, with the launch of a new model of Mitsubishi Electric’s Jet Towel, the original high speed, low energy dryer which is said to be saving on energy costs in food industry facilities around the UK .

The 8th generation of the Mitsubishi Jet Towel – the first hand dryer to use high-speed air jets to hygienically dry hands rather than classic hot air dryers – is easier and quicker to use; offering extremely high energy efficiency, improved hygiene and an compact footprint. It is available in a choice of three colours – silver, white and black.

Fawn Litchfield, Mitsubishi’s UK sales and marketing executive for Jet Towel, explains: “Unlike a conventional hand dryer, Jet Towel does not use hot air to evaporate moisture from just-washed hands. Instead, it uses a high speed jet of air to blow it off. Hot air dryers can act as incubator-distributors for bacteria while Jet Towel drives the moisture and any germs down into a drain, so is fundamentally hygienic. Additionally it is made with an anti-microbial material on all its major areas.

“Perhaps most significant is that Jet Towel takes from only nine seconds to completely dry hands, whereas hot air dryers take so long that most people walk off with still damp, germy hands.”

Its compact dimensions make it easier to mount on the wall, and is likely to open up more positioning options in many washrooms. The Jet Towel is completely non- contact during operation, which improves hygiene; hands are simply inserted into the drying chamber and the air jets automatically switch on. The drying chamber is 40 per cent larger than on earlier models; making usage easier for everybody.

Litchfield continues: “Noise levels are down by one decibel to 58dB. This doesn’t sound like much, but is in fact quite significant as decibels are a logarithmic scale rather than linear. Amazingly, despite this the air flow is almost 25 per cent faster, up from 80m/s to 98m/s, which improves drying time.

“You might think that drying your hands doesn’t use much energy, but you need to multiply that by the three to 10 times most people wash their hands daily – and then multiply it again by the number of people using a busy washroom. The bottom line is that, in facilities management, hand drying is expensive unless you use a Jet Towel.”

Earlier models of Jet Towel were always noted for their frugal energy consumption – about one-tenth that of a hot air dryer – and the new unit once again redefines the standard using from only 550 watts. A technical analysis shows that 20 per cent less air by volume is used which, when coupled with a 40 per cent reduction in resistance at the jets, adds up to a 15 per cent saving in energy and reduced running costs.

The cost of running Jet Towels also stacks up favourably compared to paper towel dispensers or laundering linen towels. Used paper towels are increasingly expensive and of course go to land fill, so are not environmentally sympathetic. In contrast, since March 2011 high speed hand dryers attract tax relief under the Enhanced Capital Allowance scheme. The Mitsubishi design team has also addressed the hidden costs of maintenance. The new design is sleeker and smaller with fewer joint lines, helping speed up cleaning of the unit.

Lighting the way to savings

Are renewables the answer?