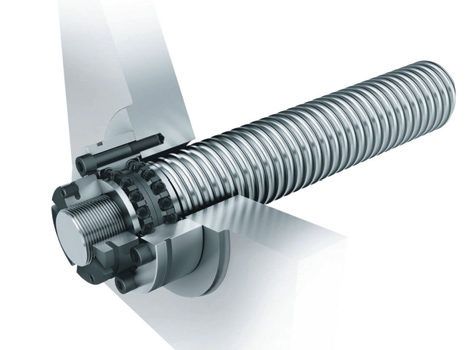 A new angular contact ball bearing has been developed that prevents the premature failure of ball screws in short stroke applications, particularly those that occur due to false brinelling.

This occurs when the separating lubricant film between the rolling elements and raceways is no longer present, for example, due to a lack of relative motion between the rolling partners or where the pivot angle is very small. This leads to localised fretting corrosion where the unprotected steel-to-steel contact point starts to corrode. Vibrations cause the corroded parts to detach as they are formed and become embedded in the lubricating grease. Over time, the rolling elements fuse to the raceway, which leads to bearing failure.

Schaeffler’s new ZKLF..-HC hybrid angular contact thrust ball bearings provide a suitable solution. The bearings use ceramic rolling elements, so there is no possibility of metal-to-metal contact. Also, the limiting speed is increased and there is a threefold increase in grease operating life.

As a result, the DIN standards working groups have decided to withdraw the theoretical reduction of the dynamic basic load ratings. In terms of lifecycle costs, this means there is now nothing to oppose the use of hybrid bearings for ball screw applications.