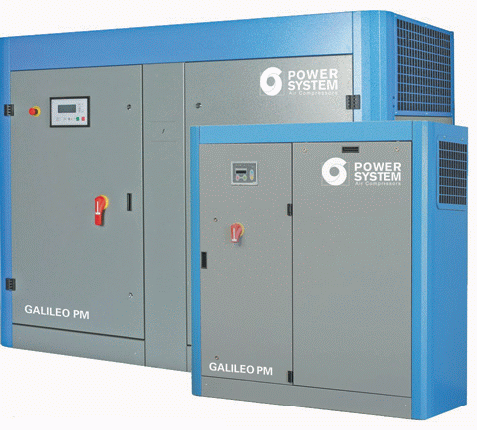 A new range of variable-speed air compressors from FPS Compressors is claimed to represent a significant step in maximising energy efficiency. Called the Galileo range and manufactured by Power System Group, the machines differ from standard variable speed compressors by using direct drive, permanent magnet motors and sophisticated ­controls said to bring gains in energy efficiency. Normal variable speed compressors are fitted with an asynchronous or induction type electric motor that is usually paired with a frequency controller or inverter. This arrangement can be useful in saving power when compared to the on/off regulated compressors. However, whilst being a step forward from older technology, this can be less energy efficient during periods of low demand and high demand.

The new Galileo compressors are based on the PS-DV Series platform of variable-speed compressor with highly efficient compressor air end, direct drive and sophisticated controls. The adoption of a new generation permanent magnet motor brings further gains in energy efficiency of around nine to 12 per cent when compared with other variable speed compressors.

Walther Trowal gets the finishing touch from Elmo Rietschle