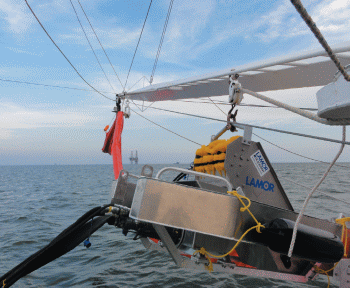 The April 2010 Gulf of Mexico massive oil spill needed immediate external support, expertise, solutions and equipment to assist in the containment and clean-up efforts. Finnish-based Lamor Corporation immediately set its action plans into motion and within 36 hours, through its global network, the company airlifted its arsenal of equipment and key personnel to the scene.

The blown-out well on the ocean floor off Louisiana threatened the entire ecosystem as well as the livelihoods of tens of thousands of people at a rate of over 5,000 barrels of leaking crude oil per day.

Oil booms and skimmers were sent by Lamor to assist in the clean-up efforts. To meet the urgency of equipment needed, the company increased its workforce shifts globally to make more boom production available on site. An estimated 300,000 metres of boom has been sent to the Gulf.

Lamor’s oil containment booms enclose the oil on and below the water surface and its larger skimmers are pitched behind a vessel recovering oil from the ocean surface. Smaller skimmers were used on the beaches to clean-up oil that washed ashore. The company initiated immediate installation of its equipment and trained the contracted oil clean-up vessel operators. Moreover, being a significant and major clean-up and response provider in the Gulf, Lamor gave consultations to the command centre that was set up to engage in the oil spill operations.

During the Gulf incident, three other oil spills occurred in China, Singapore and in Michigan (US) simultaneously and Lamor responded to these. The company has facilities strategically located throughout the world with a stockpile of equipment to ensure that its response and readiness is not limited to one incident or region.

CEO Fred Larsen says: “We worked at full capacity in all of our facilities worldwide during the Gulf of Mexico incident, and continue to do so still.”

Public and government awareness and concern about oil spills was reignited by the Gulf of Mexico incident that made it clear corporations are taking some risks due to shrinking oil reserves, rising oil prices and offshore oil deposit discoveries in deep waters. The primary source of accidental oil spills into seas is associated with oil transportation by tankers and pipelines. Natural non-human generated oil spills also endanger our environment both offshore and inland.

“We continuously invest significantly in safeguards and solutions,” says Larsen. “Our entire ecosystem is threatened without having the best available solutions, technology, equipment and expertise in handling oil spill recovery operations under any conditions and in all geographical terrains. This is an ongoing effort, and we need to be ready and prepared to tackle incidents around the world quickly, strategically and effectively. Moreover, we offer certified training in oil spill recovery and preparedness to authorities and private corporations in the oil and chemical industry.”

In addition, the company offers industrial solutions for optimal oil recovery, landing crafts and oil recovery vessels designed by in-house engineers and a complete product portfolio for oil spill response in arctic conditions. Moreover, it has land remediation solutions for operations in deserts, swamps, and marshes, as well as for areas with industrial pollution. Lamor prepares contingency plans and organises rapid oil spill response operations. To maintain and develop its range of equipment, the company has production facilities in Europe, the US, and Asia.

A month before the Gulf incident, Lamor was contacted by aviation insurers to urgently respond to an incident in Estonia. The company deployed its equipment and teams to Estonia after an Antonov 26 cargo plane made an emergency landing on Lake Ülemiste, near Tallinn. The lake, which was frozen solid, is the principal drinking water reservoir for the city. Oil leakage escaped from the fuselage of the plane under the ice and the company was tasked to ensure that the lake was immediately cleaned and purified from all oil and any other pollutants caused by the accident to protect the city’s vital reservoir.

Lamor (Larsen Marine Oil Recovery) is a family run enterprise with offices strategically located around the world to best serve the environmental needs of corporations, the public and ecosystems rapidly and efficiently. The company develops, manufactures, and supplies oil spill recovery equipment and services.