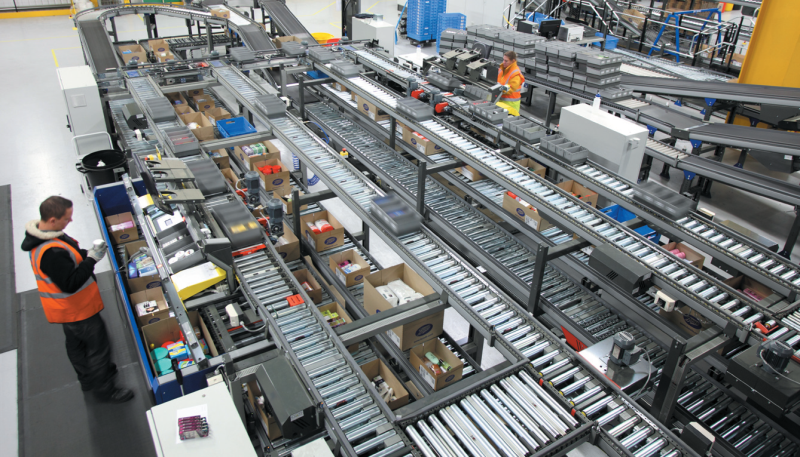 Award-winning solutions from Boots and John Lewis were in the spotlight at a special event for Knapp customers and press in Austria recently. Guests were also shown Knapp’s latest technologies first hand including the Pick-it-Easy Robot, a state-of-the-art robotic picking system, and

Pick-it-Easy Move, a semi-automated picking solution said to have the potential to revolutionise grocery warehouses

Head of fulfilment for boots.com, Daniel Wallace, gave guests an insight into the multichannel system supplied by Knapp to Boots UK’s new distribution facility in Burton-upon-Trent, which opened in February. The pharmacy-led health and beauty retailer had experienced rapid growth in its online operations, driving a move from its outsourced, largely manual operation in Birmingham to in-house fulfilment in the new Burton Service Centre.

The warehouse not only supports order processing for the 28,000 product lines of the company’s e-commerce operation, but also its Christmas gift ranges (some 2,500 product lines) and its international distribution, which prepares orders for Boots stores abroad.

Alliance Boots invested over £50 million in the facility, which included the purchase of the existing 460,000ft2 building – the area of six football pitches – its total refurbishment and the automated handling systems.

At the heart of the solution are 12  Knapp OSR Shuttle systems, which provide automated storage combined with goods-to-person order picking at eight ergonomically designed ‘Pick-it-Easy’ workstations. Suitable for slow- and medium-moving goods, the OSR Shuttle systems process the majority of the inventory at Burton. Fast-moving products, meanwhile, are picked in a flow rack area at one of eight workstations that utilise pick-to-light technology.

The system handles up to 75,000 order lines per day, with small orders being batch picked and manually packed. Knapp was awarded the accolade ‘Technology & Logistics Supplier of the Year’ at the 2012 Grocer Gold Awards for the system it supplied to Boots UK, which has increased time efficiency by 65 per cent compared with the previous manual operation, while also improving order traceability. Although yet to experience its first Christmas peak, Wallace concludes that the solution was already providing a significant reduction in variable costs. He also stated that the system provided a platform for further growth by having a modular design. Some 75,000 order lines per day are processed at Boots’ Burton Service Centre.

The award-winning distribution systems of the leading retailer, John Lewis Partnership, were also presented to visitors. John Lewis received the Chartered Institute of Logistics & Transport’s Annual Award for Excellence in the category of ‘Materials Handling Equipment and Technology’ at the end of last year. The  accolade recognises the company’s use of logistics technology – supplied by Knapp – at its flagship national distribution centre at Magna Park, Milton Keynes.

The original 750,000ft2 facility went live in 2009. The statistics of the facility are impressive: over 14km of conveyor, 13 ASRS miniload cranes, 52 decant workstations and 51 picking stations, for example. Magna Park handles the 90,000 ‘binnable’ lines of John Lewis’ 350,000 product lines – with binnable meaning that two or more items can fit in a tote. Products from Magna Park arrive at John Lewis’ 29 department stores and six John Lewis At Home stores as shelf-ready, single products, organised by department. Given that each individual store is laid out differently, these store-friendly deliveries are no mean feat.

Knapp’s latest developments focus around the use of its Vision technology of image recognition and augmented reality. By applying vision systems to its existing and new solutions, Knapp is improving picking accuracy in its quest to achieve its aim of a ‘Zero Defect Warehouse’.

Knapp’s Pick-it-Easy Robot, which was shown to guests, combines a robot with a multi-axis picking head with a sophisticated image recognition system. The Pick-it-Easy Robot detects the easiest item to pick among randomly oriented articles in a tote, based on the amount of accessible surface area. This data is captured in the vision-enabled screening chamber immediately adjacent to the robot. Then the robot selects the most appropriate gripper for the item to be picked, which is attached magnetically to the head during a very fast gripper change.

Also being demonstrated were some of the ergonomically designed workstations from Knapp’s Pick-it-Easy range. Pick-it-Easy Move is a solution being developed in co-operation with Knapp customer, Spar. The solution enables ergonomic and efficient picking of fast-moving products directly from pallets using the goods-to-person method. Pallets of goods of one type are delivered by the conveyor system to a moving shuttle with integral operator platform. This shuttle moves automatically between a dozen target locations – six on each side – featuring roll cages on lifts. Required goods are picked from the pallet according to instructions given on a computer screen in front of the operator, with cartons being pushed from the pallet to the roll cage with the help of roller wheels mounted on the side walls of the shuttle’s working area.

New warehouse space brokerage portal is free to use