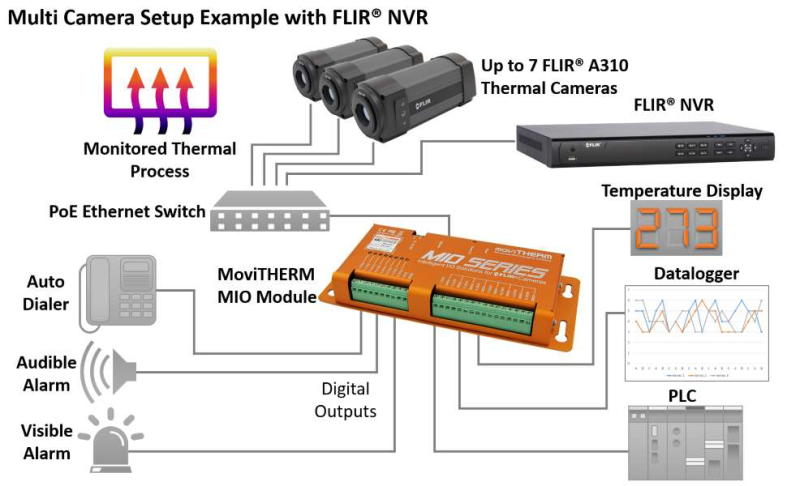 Launched in April 2016 and already the winner of the Innovators Award 2016*, the MoviTHERM MIO Series Intelligent I/O module turns FLIR cameras instantly into complete monitoring systems for fire detection. It’s available in two modules, one for FLIR AX8 cameras and the other for FLIR A310f cameras both of which are used across a wide range of industry sectors throughout the UK.

Matthew Clavey, director of Thermal Vision Research, said: “The MIO Series modules developed by MoviTHERM are a ground-breaking innovation for the thermal imaging industry. For the first time, thermal output can be monitored and warning triggers acted upon through a simple web-based interface – eliminating the need for a vast array of potentially unreliable supporting infrastructure.

“The two compatible cameras, the FLIR AX8 and FLIR A310f, are popular recommendations for use where there might be issues with overheating such as plant or server rooms, fire protection installations, warehouse management or even waste disposal sites. And then, the functions of the MIO Series are simply immense – from accessibility via a smart phone, to connectivity across vast multi-camera networks. This really is a new opportunity and a bench mark in thermal imaging monitoring technology.”

Each MIO Series module comes with eight digital alarm outputs and eight channels of 4 to 20mA outputs which can be assigned to any of the connected cameras. Up to seven cameras can be monitored through a single unit or the system can be scaled up for connection to over 100 cameras. Set up is straightforward using a built-in webserver and firmware can be upgraded when improvements are made using a simple download process.

MoviTHERM is now promoting the product at exhibitions in the US, but onsite demonstrations can be arranged in the UK by calling 0333 200 4667 or visiting www.thermalvisionresearch.co.uk. Full product details and technical specifications can be found at www.movitherm.com.

The road to energy efficient facilities