Dycomet UK is reporting extensive new interest in its ‘cold spray’ metal additive manufacturing systems as a result of its presence at the recent Advanced Engineering Show. The company, which acts as the UK distributor and developer, demonstrated both its low pressure and high pressure systems – each of which overcomes issues such as stress, distortion and porosity that are often associated with traditional welding and thermal spraying.

The process features a supersonic airflow into which metal particles are injected to create high levels of kinetic energy which produce a rapid build-up of metal that becomes structurally integral with the substrate. 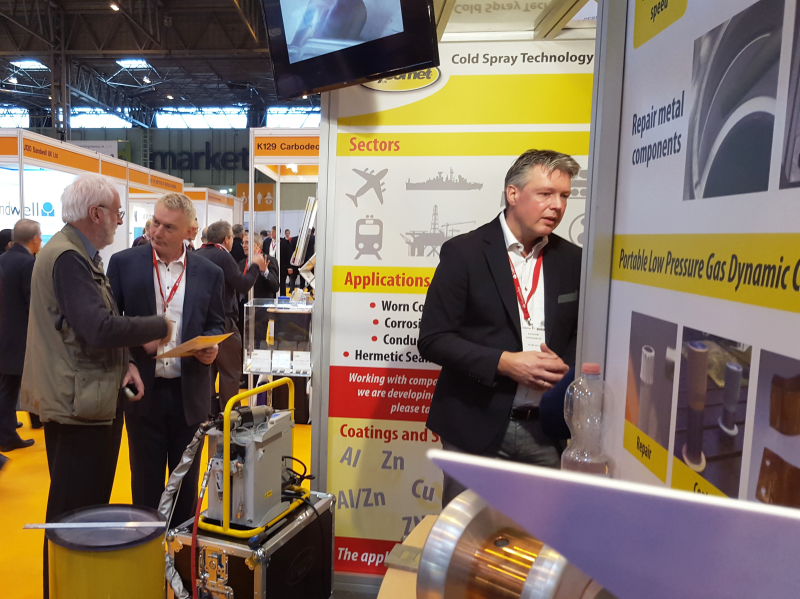 “This acceleration in the airflow means the particles deform as they hit the substrate, changing the composition of the surface without the risk of high temperatures which can, potentially, lead to material weakening or distortion,” comments Nick Gilfillan, Dycomet UK Managing Director.   The company’s stand at the show included a demonstration of the low pressure system which attracted keen interest each time it was operated.

“Alongside this a major part of our presence at the Advanced Engineering Show was devoted to introducing the high pressure Plasma Giken system which was being shown in this country for the first time,” Nick Gilfillan continues.  Delivering up to 750 PSI, the system can handle the most challenging materials such as MCrAIY and stainless steel with results achieved quickly via feed rates of up to 750g/minute.  Its ‘anti-clogging’ design provides continuous, reliable cold spray performance that can operate either as a stand-alone facility or be incorporated directly into a production line environment.

Dycomet cold spray technology can be used with a range of substrates from aluminium, cast iron, steel and copper to glass, ceramics and composites.

“As a result it has been shown to open up new possibilities in sectors that range from processes such as repair, restoration, sealing and corrosion protection to electrical conductivity or bespoke specialist needs.  It is a list that represents clear cut opportunities for manufacturers, engineers and designers which were widely appreciated by visitors to our stand at the show,” concludes Nick Gilfillan.