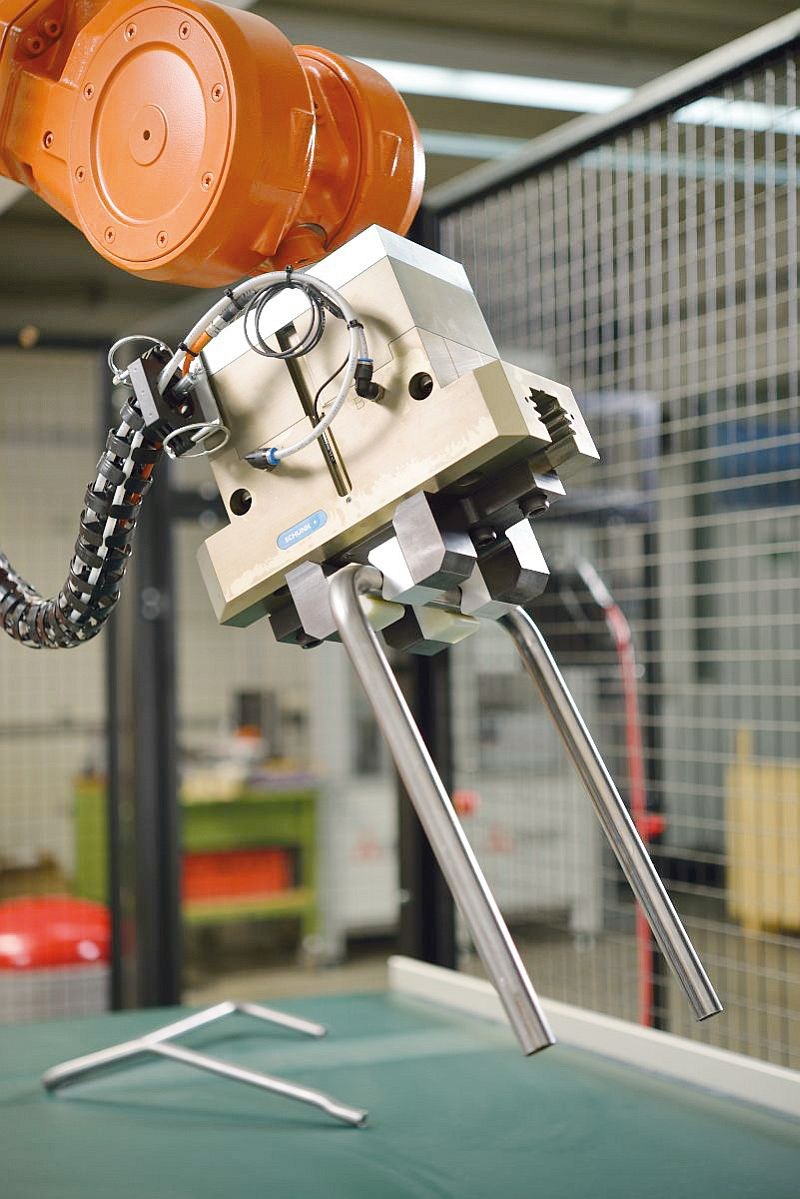 Industrial robots are on the advance worldwide, and for a good reason: They are very versatile and allow short cycle times in production. The precondition for their successful use is the perfect integration into existing production systems – a service which KUK-automation GmbH has been providing to their customers successfully for many years. To minimize downtime, the automation experts use the ROBOTRAX cable carriers from TSUBAKI KABELSCHLEPP.

“KUK supports users across all industries with the commissioning and setup of robot systems,” explains graduate engineer André Röttger, Managing Director of KUK-automation. The company was founded in Beckum in North Rhine-Westphalia (Germany) in 1990 as a specialist electric company and has continuously developed since then. “Today we specialize in complex tasks of automation technology, and robotics is a part of this.” KUK-automation offers the entire range of services from one single source to provide best possible customized automation technology – from planning and implementation to customer service. With extensive knowledge of mechanical engineering and process engineering, the company implements projects of any size all over the world. 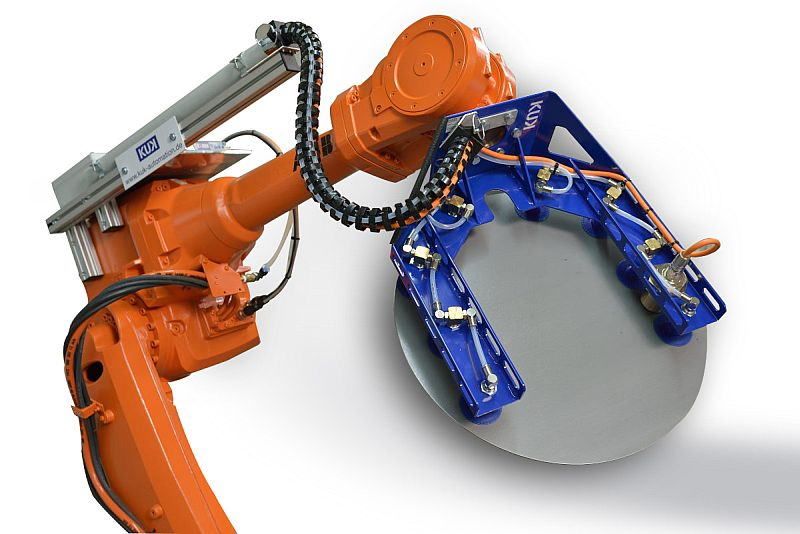 In the field of robotics, KUK takes on the planning, design and manufacturing of robot cells for handling, separation and assembly tasks. Robots from ABB, KUKA, Mitsubishi and FANUC are used. The services include project engineering, switchgear manufacturing, system installation and software creation. “We design manual workstations or robot gripper systems, for example,” explains Röttger. “Whether small or large robots, they are always integrated perfectly into the existing production plants.” This is ensured by virtual real time simulations and by test installations at the KUK workshops. The KUK employees also optimize the setup and the motion programs of the robots and configure the control systems.

ROBOTRAX cable carriers from TSUBAKI KABELSCHLEPP ensure maximum freedom of movement for the industrial robots used by KUK. “We only use the special cable carriers from TSUBAKI KABELSCHLEPP. After all, undamaged cables are a prerequisite for uninterrupted operation of the robots. This area of application also entails special requirements which ROBOTRAX can fully meet.” KUK initially had to learn that this is not the case for all comparable products on the market: The results were production downtime and increased operating costs. The cooperation with TSUBAKI KABELSCHLEPP then started with a personal recommendation. KUK has been using the ROBOTRAX system ever since.

“The ROBOTRAX system consists of the cable carrier and special accessories,” says Werner Eul, Product Manager Cable Carrier Systems at TSUBAKI KABELSCHLEPP. “This allows us to really meet all the challenges which arise in this special area of application with 3D movements.” The ROBOTRAX cable carrier itself is designed especially for use in industrial robots. It consists of individual plastic links with spherical clip connections on both sides which support the three-dimensional swivel and circular movements of the machines. The forces are not only transmitted through the ball joints, but also through a steel cable at the center of the cable carrier, making it suitable for extremely high towing forces and accelerations. Röttger explains the benefits: “The steel cable design creates very high strength in the cable carrier. Additionally, the maneuverability of the ROBOTRAX can be adjusted individually. The robust cable carrier supports the robot movements in the best possible way and features a very long service life in continuous operation.”

The cable carrier is easily fixed to the robot with quick release brackets. They can be attached to any chain link and can be individually adapted to the movement of the machine. KUK also uses the PULL-BACK UNIT. This is an active pull-back mechanism which additionally extends service life and decreases downtime. The device keeps the cable carrier under tension, preventing unwanted contact between the cable carrier and the robot to protect the cables inside. “Particularly in measuring robotics it is very important that the cable carrier is not in the way and is always kept taut,” Röttger explains. “This also protects the very expensive 3D sensor in the long term.”

Another component of the ROBOTRAX system is the PROTECTOR stroke system which is available for all sizes. During fast movements and in large work envelopes it protects against hard impact, excessive abrasion and premature wear. It also limits the smallest bending radius. Downtime is minimized as only the PROTECTOR rather than the entire cable carrier has to be replaced in case of damage. 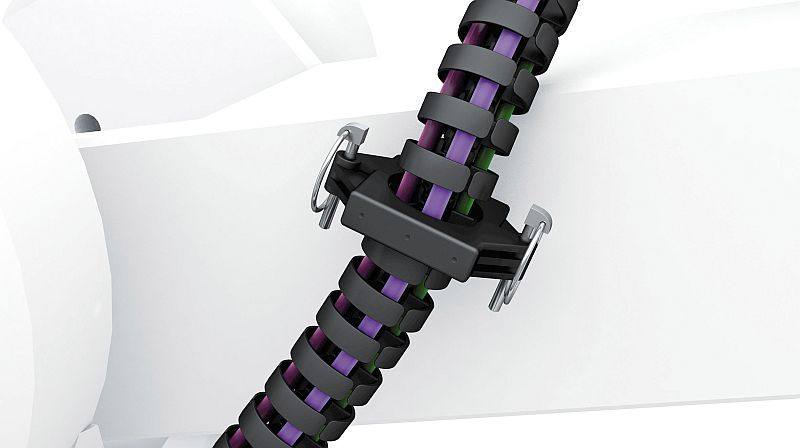 Based on the good experience, the collaboration between KUK-automation and TSUBAKI KABELSCHLEPP has now developed further – the two companies have started a development cooperation. “We test new cable carriers which are not yet available on the market,” Röttger explains. Using the experience gained, the automation expert provides detailed feedback and makes suggestions for improvement which are then used in the further development of the cable carriers. A cooperation model which benefits both sides: “We appreciate the long-standing experience of KUK-automation in the area of implementing robot systems,” confirms Jochen Bensberg, employee and product developer of the ROBOTRAX system at TSUBAKI KABELSCHLEPP. “The joint research and development projects generate new ideas and impulses for both sides.” So it is overall a win-win situation which last but not least also benefits the user.

ABB’s largest ever robot is 25% faster than the competition 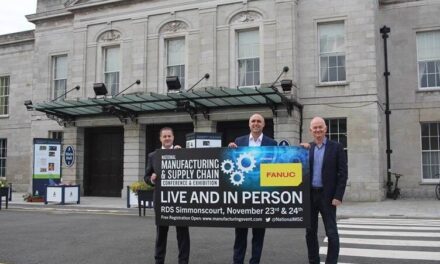