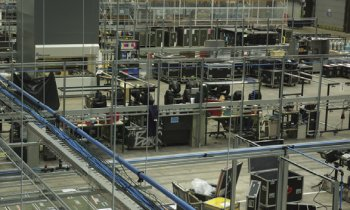 Consolidating its smaller sites into a single, 7,500m2 factory unit has provided PRG, one of the UK’s largest theatrical lighting companies with the advantage of updating and making major savings in its fundamental operation to supply compressed air across the site using a Transair rapid-fit system

PRG Europe now occupies a one square kilometre unit on the former MG Rover Longbridge car plant near Birmingham and has used the opportunity to move from “a variety of methods” to a single Transair rapid-fit compressed air pipework system from Parker Legris. The US-owned, worldwide group concentrates on the hire of sophisticated theatrical lighting for film, television, theatre and live events such as rock concerts. Compressed air is vital to the operation, with items returned from hire requiring the use of air tools, blowers and a state-of-the-art spray booth.

Until the move, pipework systems developed over 20 years at the previous sites in Birmingham and Greenford had ranged from the use of galvanised steel to rubber hose, explains facilities manager, John Harrison, with the “inevitable problems” of oil and water in the system and pressure loss caused by leakage through piercing of pipes and tubes. “Expansion of the business and the move to new premises gave us the opportunity to look at new technology and get it right first time,” says Harrison.

Having worked with Parker Legris’ Transair distributor for more than 20 years, PRG was quick to recognise the benefits of a modern, rapid-fit system that could grow and change with its requirements. “The last thing we needed was another system of random add-ons,” says Harrison. “Transair is versatile and will allow us the opportunity to tailor and expand the system.”

System design required the provision of compressed air to practically every part of a factory unit measuring some 125 x 60m. A variable speed compressor was installed for maximum energy efficiency and, with its low pressure drops from compressor to point of use, the energy efficient nature of Transair was an equally important element. A ring main in 63mm corrosion resistant aluminium Transair has been installed throughout the Longbridge site, with drops in both 40mm and 25mm pipework taken to workbenches and to the spray booth.

“We can be working 12 hours a day, seven days a week and compressed air is fundamental to practically every operation,” says Harrison. “With an isolation valve at head height on every branch, Transair gives us the opportunity to extend or amend the system without having to shut it down.