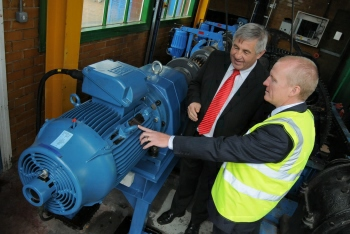 Determining that electric motors are properly loaded is essential for energy efficiency. It enables users to make informed decisions about when to replace motors and about which replacements to choose, says Marek Lukaszczyk of WEG Electric Motors

Measuring motor loads is relatively quick and easy with the right equipment, and every company with a significant motor stock should perform a motor load and efficiency analysis as part of their preventative maintenance and energy conservation programmes.

Too often, motors are oversized or have been rewound several times, leading to gross inefficiencies in their operation. As a result, it is imperative that before any replacement is considered, the actual loads served by existing motors are determined, together with their annual hours of operation.

Most electric motors are designed to run at 50 per cent to 100 per cent of their rated load, with maximum efficiency around 75 per cent of rated load. Thus, a 10kW motor has an acceptable load range of 5kW to 10kW, with peak efficiency at 7.5 kW. As a general rule, high efficiency motors garner the maximum savings when they are loaded in excess of 75 per cent of full load, and are operated more than 4,000 hours a year.

The problem with motor efficiency is it tends to decrease dramatically below about 50 per cent load, which is bad news when one considers that as little as 20 per cent of the electric motors in the UK are running at their full rated input, due to oversizing. It is also bad news in terms of energy costs, as it has been calculated that a single percentage point increase in efficiency will save lifetime energy costs equivalent to the purchase price of the motor.

Under sizing of motors can be just as damaging, because an undersized motor is likely to be overloaded causing it to overheat, lose efficiency, and fail prematurely with costly ramifications for production.

A service factor is a multiplier that indicates how much a motor can be overloaded under ideal ambient conditions. For example, a 10kW motor with a 1.15 service factor can handle an 11.5kW load for short periods of time without incurring significant damage. Although many motors have service factors of 1.15, running the motor continuously above rated load reduces efficiency and motor life. The motor also must never be operated in an overloaded state when the voltage is below nominal, or when cooling is impaired by altitude, high ambient temperature, or dirty motor surfaces.

Efficiency is also lost when motors are run either above or below their design voltages. The result of over-voltage is a lower power factor, which reduces overall motor effectiveness. The same is true of motors that are operated at less than 95 per cent of their design voltage. They typically lose two to four points of efficiency, and also suffer service temperature increases of up to 7°C, reducing motor insulation life and impairing reliability.

Armed with this knowledge, the recommendation is motor users should survey and test all of their motors that operate over 1,000 hours per year. Then, using the analysis results, divide the motors into these categories:

• Motors that are significantly oversized and underloaded: replace these with more efficient, properly sized models at the next opportunity, such as scheduled plant downtime.

• Motors that are moderately oversized and underloaded—replace with more efficient, properly sized models – wait until they fail.

• Motors that are properly sized but standard efficiency—replace most of these with energy-efficient models; again, wait until they fail.

One problem with this is it is often difficult to determine the characteristics of motors that have been in service for some time. It is not uncommon for the nameplate on the motor to be lost or painted over. If the motor has been rewound, there also is a probability the motor efficiency has been reduced.

When the nameplate data is missing or unreadable, efficiency values must be determined at the operating load point for the motor. This involves using power, amperage, or slip measurements to identify the load imposed on the operating motor, then obtaining a motor part-load efficiency value.

Finally, if direct-read power measurements are available, derive a revised load estimate using both the power measurement at the motor terminals and the part-load efficiency value as shown in the following Equation. Load (Output power as a % of rated power) = Pi (Three-phase power in kW) multiplied by ? (Efficiency as operated in %) divided by kW (Nameplate power rating)

For rewound motors, an adjustment to efficiency values is required to reflect that rewound motor efficiency is less than that of the original motor. To reflect typical rewind losses, two points should be subtracted from a standard motor efficiency on smaller motors (less than 30kW), and one point for larger motors. Rewind companies with the best quality-control practices can often rewind with no significant efficiency degradation at all.

Manufacturer Vs. Distributor: Is it ever possible to have the best of both worlds?