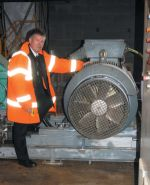 When the DC motor driving the main compounder for JFC Plastics state of the art recycling plant started to cause problems  the company looked to change the drive package completely not only to improve efficiency and reliability, but also avoid the costly and frequent maintenance work required by the DC system.

JFC Plastics turned to Newton Tesla (Electric Drives), which specialises in supplying large variable speed motor/drive packages up to 1,000kW. Newton Tesla engineers worked with Regal UK to specify a system which would provide the low speed torque, energy efficiency and reliability required by the compounder unit while also eliminating the majority of the regular maintenance required by the original DC system.

George Newton, Newton Tesla (Electric Drives) MD says: “The client was relying on a DC motor in the compounder that required a high degree of maintenance that included addressing wear to brushes and eventually a refurbishment of the armature. Under a heavy duty cycle the motor eventually failed. With the reliability of AC systems now and their ability to handle low speed torque with a matched inverter and motor package, it means we can use them in applications such as compounders and plastic extruders where we wouldn’t have considered them 10 years ago.

“Since we were by then dealing with a breakdown situation, we spoke with the team at Regal UK and they supported our recommendation of a move to an AC motor and inverter package with immediate availability. The AC drive package, except for routine bearing maintenance, would require no other ongoing maintenance work. This represented a significant cost saving, but the system we specified also provided them with peace of mind in terms of the machine’s functionality, reliability and efficiency”.

A Marathon Electric 400kW six pole motor, designed to be inverter driven, was specified by Regal.

“It literally took just three or four working days to receive the motor and this meant that we were able to quickly and effectively get the client’s compounder machine back in production. In fact I was really impressed with the Regal Beloit team. They were more than competitive on price, were efficient and really helpful.”

Consultant Advanced Energy Monitoring Systems (AEMS) found that the autotransformer starters that were formerly used with the pumps were not only inefficient, as they allowed only a single speed of operation, they were also inconvenient to use, as they could only be operated by local pushbuttons – there was no provision for operation from the control room.

AEMS approached Varicon to supply modern replacements for the obsolete starters. Varicon selected Vacon NXS drives for the application because its previous experience with these products had shown them to be easy to use, dependable and to offer excellent value for money. Varicon used Vacon drives with ratings of 160kW. The IP21 chassis versions were chosen and were pre-installed in enclosures prior to delivery to minimise the time needed on site for installation.

Stop/start and manual speed control facilities for the drives were provided in the plant control room. The new drives have been in use for almost four years, and are fully meeting the requirements of Thames Water in terms of both performance and reliability.

Asset finance solution to lack of funding in high-value manufacturing