On-site drill sharpening will pay for itself in 18 months 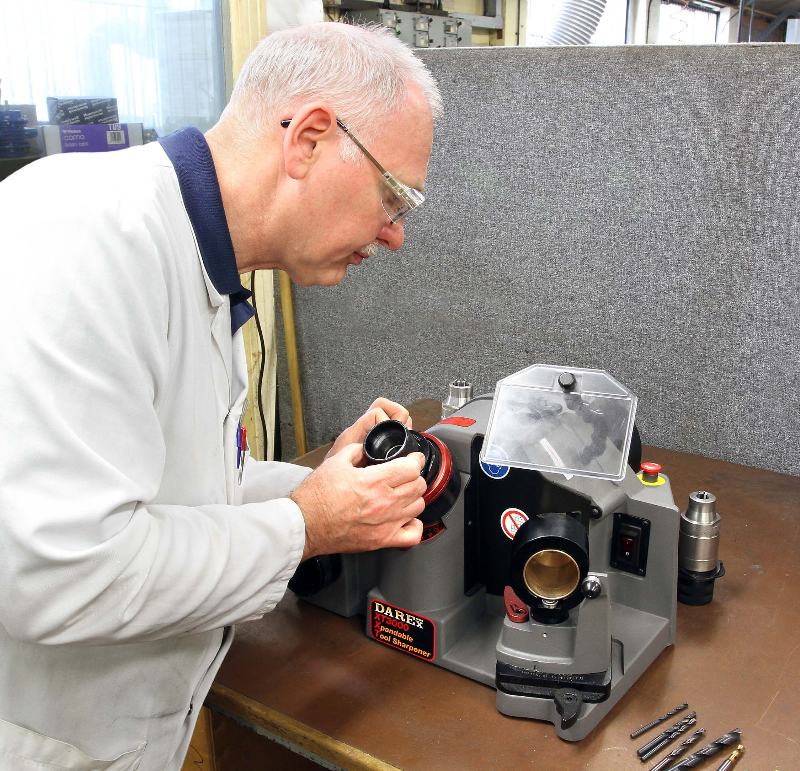 Rather than continually send worn twist drills out for refurbishment, instrument manufacturer Bailey & Mackey has bought a drill sharpening machine for its Birmingham factory. The savings will result in the investment of less than £3,000 being repaid within 18 months, according to the company’s production engineer, Alan Boylin.
Made in the USA, the Darex XT3000 bench-top sharpener was supplied by sole UK agent, 1st Machine Tool Accessories. In a three-step process taking a couple of minutes, Bailey & Mackey’s worn drills are returned to as-new condition, even those that may have been burnt or chipped on the tip.
Previously, these would probably have been thrown away, particularly the smaller ones that are difficult to grind by hand and scarcely worth sending away to be sharpened. So the ability to return them to service easily is one source of cost saving and in addition there is an ecological benefit.
The main economy results from eliminating the expense of having bits resharpened off-site. In the case of a £14 step-shank drill bit, it would typically cost half that amount to refurbish. A smaller jobbing drill might cost £2 to £3 to resharpen.
Bailey & Mackey, which manufactures pressure, vacuum and temperature gauges, switches and transducers, has traditionally employed step drills with split point geometry on its eight CNC lathes and four machining centres. Such tools do not wander when entering the cut, so a centre drilling operation can be avoided, improving productivity.
The XT3000 is able to restore the split point cutting edges on a step drill at any angle from 118 to 150 degrees and is equally capable of regrinding the chisel point on a jobber drill. At the Birmingham factory, this type of bit was until recently used exclusively on manually-operated, pull-down machines for drilling through bushes, which stop the tool’s tendency to deviate away from centreline on entry.
However, the versatility of the Darex equipment is such that a split point can also be ground onto jobber drills. This improves entry on manual machines and prevents wandering and oversize holes occurring on CNC machines, despite the absence of pilot holes.
Hitherto, the chisel point on jobbers precluded their use on CNC machines, as the attendant need for centre drilling would have compromised productivity. Now, these lower cost tools converted to split point geometry are used for CNC drilling of brass, which accounts for 80 per cent of throughput at Bailey & Mackey, and also of aluminium and plastic components. Stainless and mild steels are not processed with jobber drills, but with TiN-coated step-shank drills, as otherwise speeds and feeds would need to be reduced.
New jobber drills are reground with split points even before they have been used, if they are destined for a CNC machine. Sometimes they are similarly ground for use on manual drilling machines, as the tools penetrate faster and with lower force, so the operator needs to apply less effort.
Mr Boylin advised that care must be taken, however, as if an excessive amount of the web behind the cutting edges is removed and the point is too sharp, a jobber drill is prone to wear and breakage. Conversion of tip geometry from chisel to split is thus a compromise and is mastered with experience.
He added, “Hand resharpening of drills is inconsistent without long practice and difficult for inexperienced operators to get right, whereas the Darex machine is quick to use and delivers dependable results every time.
“Machine operators here are responsible for inspection and for resharpening their own drills when necessary. It takes 10 minutes’ instruction and a little practice to become fully proficient with the process.”
Two holders are provided with the XT3000, capable of retaining drills ranging in diameter from 3 to 12 mm and from 12 to 21 mm. Built-in CBN wheels grind the high speed steel drills, although diamond wheels can be specified if a user wants to sharpen carbide twist drills.
As a postscript, it is worth noting that in this application, free-cutting brass is being machined for a majority of the time, leading to relatively low drill wear, yet even here payback on the Darex sharpening machine is just 18 months. If, however, tough steels and exotics are routinely cut, requiring much more frequent drill tip refurbishment, payback times can be as short as three months. Diamond wheels are also available for sharpening solid carbide twist drills.