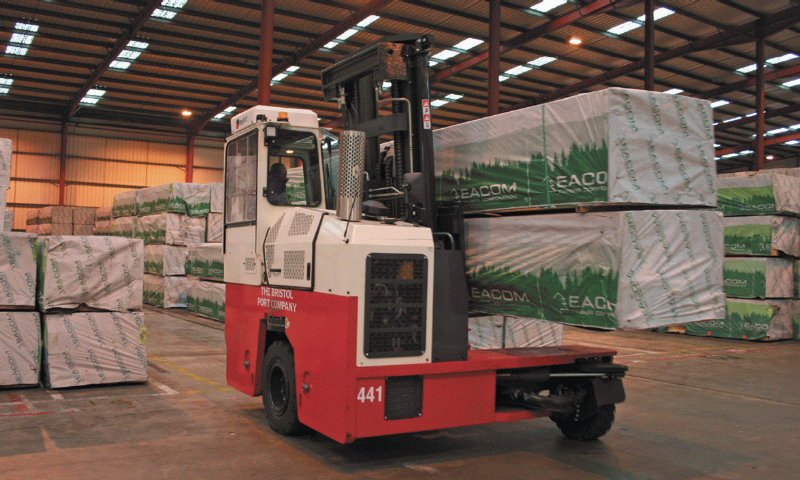 The Bristol Port Company has taken delivery of two Combilift four-way ­forklifts after winning a new contract with a Key North American timber company for undercover storage at its Royal Portbury Dock.

Due to the increased volume of timber handled following the new agreement, the company needed to improve storage density in existing sheds. After investigating a number of possibilities the Combilift trucks were deemed to be the best machines for optimising space and increasing operational flexibility.

A privately owned independent business since 1991, Bristol Port is Britain’s most centrally located deep sea port and one of the world’s most productive and technically advanced. The Combilifts work in a section of its recently expanded forest products terminal which offers 100,000m² of warehousing adjacent to berths and have replaced counterbalance trucks which were previously being used.

“Since we started this contract we have had to adapt to a much larger workload,” says development engineer Paul Osborne, “but to maintain the flexibility which our customers prize we did not want to install racking across the designated 10,000m² storage area. We therefore kept the block stacking system but needed to reduce aisle widths to create maximum storage space. The Combilifts’ four-way ability enables them to work in narrow confines as well as to block stack and we can now accommodate 30 per cent more packs than we could have achieved with counterbalance trucks.”

Osborne was aware of the Combilift brand as he had originally looked into the possibility of the trucks handling steel in another operation and after talks with Combilift’s Paul Hopkinson and local supplier Solutions Material Handling he decided on the most suitable specifications for the trucks.

The 6t capacity enables two of even the heaviest packs of timber to be carried at once and to be lifted to stack on top of others already in place for benefits in time saving and fuel economy on long runs.

The diesel powered trucks have XL style driver cabs and air conditioning which ensure a high level of operator comfort. Hydraulic fork positioners enable easy adjustment of the forks from within the cab to accord with the varying pack lengths. LED work lights are fitted as standard and Combilift supplied the trucks in Bristol Port’s own colours. The timber arrives at the port in containers, which are destuffed by other 5t forklifts, and the Combilifts then take over to deposit packs in the warehouse and pick and load consignments onto outgoing HGVs in the delivery bays.

Aisle widths are now 4m rather than the 7m needed for a counterbalance operation. “We could have narrowed this down further,” says Osborne, “but the space allotted allows for easy and speedy handling with minimum risk of product damage. Travelling sideways with long loads resting on the platform offers much better visibility for drivers and is much safer than reversing a counterbalance truck.

“The generous 6t capacity and the 6m triple mast also means we are not restricted to this particular application should we have the need to handle other products.”

The decision to go with the Combilifts was taken after careful evaluation of products in the marketplace, and with an inventory of over 300 pieces of equipment under his control from 2t reach trucks to 45t reach stackers Osborne is something of an expert at spotting the right kit for the task in hand. “With a global leading brand you have peace of mind going forward when it comes to reliability and after sales care is vital too. This is what we have with the combination of Combilift and a local supplier for maintenance issues.”

Coverall to protect you and your flame resistant suit worn beneath