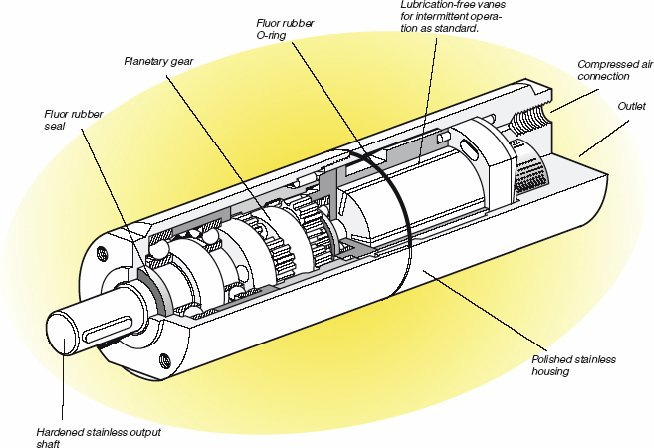 Air motors can form an important part of almost all compressed air systems, offering a cost effective alternative to conventional electric or hydraulic devices in applications from packaging, through food production to chemical processing. They are lighter, have fewer moving parts and can safely be used in harsh, wet and volatile environments as they do not require electrical power. Additionally, many of the latest models carry ATEX certification, and can be stopped, started and run in different directions without penalty.

In essence, air motors are used to produce continuous rotary power from a compressed air supply. Although there are a variety of designs of motor available, including rotary vane, axial piston, radial piston, gerotor, turbine, V-type and diaphragm, most incorporate a relatively simple arrangement of vanes or pistons.

A vane air motor consists of a cylindrical rotor, mounted within a cylinder and with spring mounted axial vanes being set into slots that run along the length of its body. One end of the rotor is supported by an end-piece and bearing assembly while the other passes through a bearing unit and projects outside of the cylinder body to create a rotating shaft, onto which workpieces or other attachments can be fixed. In practice, it is normal to connect the shaft end to a planetary, helical or worm drive gearbox, typically mounted directly to the motor to create an integrated system.

The rotor is operated by forcing compressed air through an inlet port directly against the vanes. This sets the rotor spinning, with the spring-loaded vanes being held at a constant pressure against the wall of the cylinder to create an effective and almost friction-free seal, especially at low operating speeds. Air trapped between the vanes is released and fed to an exhaust as they spin; the direction of rotation can easily be changed, simply by reversing the direction of air flow.

The internal design ensures air pressure always operates directly and at right angles against each vane, so that motor torque is determined by air pressure and the vane surface area, with torque rising linearly as load is applied, until the point at which the motor stalls. Both motor torque and speed can easily be controlled by means of flow restrictors or pressure regulators in the feed to the inlet port.

Air motors can be used equally effectively with both lubricated and non-lubricated air, making them suitable for a range of applications. They have a minimum number of moving parts, making them reliable with a long service life, and quick and simple to service with minimal maintenance.

Unlike electrical motors, air motors can safely be loaded until they stall, and can be stopped, started and reversed continually without causing damage. They are also designed to withstand extreme heat, vibration and impact, making them suitable for applications where harsh environmental conditions and heavy loads are typical, such as in the mining, railway, marine, steel aluminium and chemical manufacturing industries.

By comparison with conventional electric or hydraulic motors, air motors generally have a higher power density, meaning a smaller air motor can deliver the same power as its electric counterpart; indeed, an air motor can weigh as little as a quarter of an electric motor of the same output and occupies only a sixth of the space. In addition, this technology typically generates far less heat in operation.

As no electrical power supply is required, air motors can easily be used in ATEX-zoned areas, while stainless steel versions such as Parker’s P1V-S series, have been introduced for food processing applications. These latest devices have also been redesigned to improve operating efficiency still further with the introduction of a third port, which is positioned after the standard exhaust port, to allow residual air that may have become trapped and compressed between the vanes during operation to be released. This port also doubles up as a pressure inlet when the motor is operated in the reverse direction.

These particular designs of air motor are normally supplied with planetary reduction gears built into the polished stainless steel housing, which is then sealed by a fluor rubber O-ring. The fully sealed output shaft is also manufactured from polished stainless steel, with the air motor and gearbox using only food-safe lubricants, and the smooth cylindrical shape of the motor eliminating the risk of bacterial accumulation.

This type of air motor uses a number of cylinders arranged either axially or radially within a sealed housing, with output torque being developed by air pressure acting on the pistons which then reciprocate within the cylinders. This design enables the highest starting torque and load carrying capacities with accurate speed control, while also providing low noise operation.

While the cost of an air motor may outweigh the benefits if no convenient source of compressed air exists, in applications where compressed air is already available this technology offers a tough, sophisticated, highly versatile power option. Indeed, air motors are becoming a popular choice of power for many industrial applications and are helping companies to realise significant improvements in performance and productivity, while also reducing maintenance and operating costs.